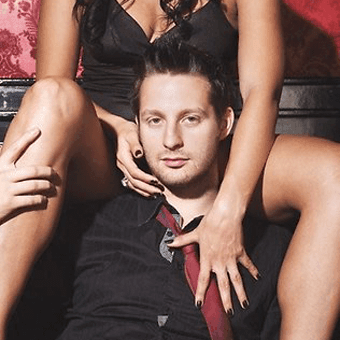 Adam Lyons has been part of the London Seduction Society and the seduction community since 2005. In 2007 he began working with PUA Training and became known for teaching social circle game which he had been using successfully in the London night club scene.

During his PUA career, he has built his a reputation over the years with his "Attraction Explained" brand.

Adam Lyons is well known for making use of concepts first introduced by Mystery such as pre-selection and social proof. Adam used these concepts as a starting point and takes them even further. His seduction skills include successful cold approaching without being part of a large social group. At the peak of his career he reports often being accompanied to clubs with 20 or 30 good looking women.

The methods taught by Adam have evolved over the years, although they have always involved the use of pre-selection and social proof to some extent. He often performs short "sets" in a bar or club in which he interacts with attractive women in order to build instant social proof before approaching the woman he is really interested in.

Concepts and theories taught by Adam include:

Myframe which is a basic understanding of what attracts a man and woman to one another.

The principles of attraction which involves the basic qualities that cause attraction between two people before ever interacting with one another. He explains why a singer may seem attractive while performing, but not so much in a social situation.

Metagame which involves understanding the psychology of situations and events in the immediate vicinity of a woman you wish to meet. The idea is that more than spoken interaction is involved when interacting with women.

Entourage game in which being surrounded by many beautiful women will make you appear attractive and, in turn, allow you to attract other desirable women.

One way which Adam explains attraction is by using this formula which represents events leading to someone being attracted to you if they had not been at first site:

Adam states that he was voted least likely to get a girlfriend by classmates when he was 15 years old. During his teens he greatly enjoyed playing strategy and role playing games such as Dungeons & Dragons and Magic: The Gathering. He says that he had a difficult time with women until around 2005, which is when he first discovered the seduction community at the age of 25.

Prior to the beginning of his career as a dating coach, Adam held multiple jobs including prop technician for a live action role playing company where he created armor and weapons and PR Manager for several different agencies.

After dating for more than 2 years, he was married to Amanda Lyons (maiden name Amanda Torres) in June 2009.

In 2013 Adam parted with Amanda "in a very pleasant and amicable divorce due to the fact that as we aged we had different goals". Adam also said "I learnt the skill set I did to have the life I wanted. When my relationship no longer matched the future I wanted It made sense to move on."

In December 2014 he published the video below with his 2 girlfriends he has since been living with for around a year.

Adam says that he began spending quite a bit of time browsing forums and looking through other online content in regard to picking up girls after discovering the existence of the seduction community in 2005. It wasn’t until 2006 when he finally took action by using what he had learned to pick up women. Later, he began befriending pick up artists including coaches from Mystery Method, the London Seduction Society, and more.

At this time, he decided to create a nickname for himself, “AFC Adam”, which later became his publically known alias. AFC actually stands for “Average Frustrated Chump”.

Adam first realized that he could use the “social proof” technique to achieve better results picking up women while employed in the public relations and promotion field. This is when he started Project Entourage along with Love systems Sheriff and Mr. The company’s concept was to promote clubs and parties by bringing desirable women to them. The point was to improve the events atmosphere and improve the reputation of the establishment.

People began seeing the success of the company and started asking for advice. As a result, he began speaking at events for boot camps hosted by Love Systems and Mystery Method. He later worked together with the team from PUA Training.

Finally, it was requested of him to open the 2007 PUA Summit which improved his reputation as a PUA in the United States. He was still very new to the industry, but gave his pick up style the title, ”social circle game.”

His was actively dating Amanda Lyons at that time. In 2008 she teamed up with Adam to begin coaching alongside him. Since then, they have hosted many PUA training events together.

He moved to Austin, TX in 2009 so that he could further develop PUA Training in the USA. He formed a new business called Attraction Explained with Amanda in 2010.

Adam has had a relatively short career as a single pick-up coach and married Amanda in 2009. Within two years he had built up a very high profile, using his PR experience. His friends consist of PUA Trainers from the Mystery Method and Love Systems. Many of them have attested to his seduction skills, saying things like, “he’s f,,king amazing” and “This guy's game is RADICALLY different from anyone elses I've seen.”

Adam has been given awards by several organizations that comment on the Pick Up Artist community: Note: Dating Skills Review does not recommend relying on the rankings above for unbiased information. They are just presented here for your information only. Most Pick Up Artist awards are based on an observer’s opinion only with no real constructive evaluation involved.

Approval and Respect from Other Dating Coaches

"Adam's better than me in a number of situations. I've seen Adam do things I couldn't imagine doing, he's picked up some of the hottest girls I've ever seen in some of the most difficult circumstances. I've seen him go into 10 sets, 2 girls 8 guys and take the girl. He's just amazing."
Mr - Love Systems instructor


"Unlike Adam, most people in the [pick up artist] community are either marketers who copied Mystery’s system and really don't have a clue or creepy pick up guys. It's a shame we didn't get the chance to hang out we have a very similar real style and it would have been fun!!"
David Wygant

"Anyone around LA, I highly, highly want to encourage you to go see Adam at Johnny Wolf's monthly gathering!!! Adam is truly awesome, and yes, he will be part of the headline for the Summit, go see him. You probably have seen him on the Rules of Seduction UK Channel 4!"
Vince Kelvin - Ross Jeffries (Speed seduction) Original Wingman

"I met AFC Adam in Dallas. He went out with us one night. He's fucking amazing!!! One of the best I've ever seen. Great teacher as well. He spoke one of the days of the bootcamp and it was great stuff. He's amazing to watch in field."
Braddock - Love Systems instructor

Girls AFC Adam (Adam Lyons) has Been Involved with

Adam kept a low profile as to who he was dating when he was learning to pick up, although there are many pictures of his “Project Entourage”.

In 2007 Adam picked up a Big Brother celebrity, Shabnam, the night she left the house. It was covered briefly in the UK press.

Adam has been featured in the Channel 4 documentary "The Rules of Seduction" as well as being interviewed or featured in, FHM, The News of the world, The Sun, The Independent, Kerrang, The Daily Star, Glamour Magazine, Maxim, Arena, The London Paper, The London Lite, and The Star.

AFC Adam (Adam Lyons) gets Married to Amanda To...

Help us improve this profile of Adam Lyons (AFC Adam) by sending us any information you believe to be missing, wrong or lacking detail or good quality images we don't have. Please state sources where possible to make our job easier to verify the correctness of the information.