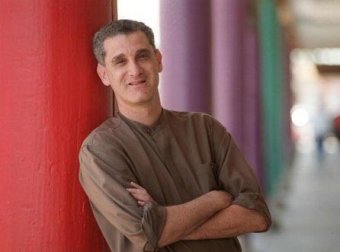 Ross Jeffries is the father of the 'seduction community'. He started writing and teaching seduction advice in the 1990s, and it was partly because of his efforts that other dating coaches began to appear.

Ross Jeffries is considered to be the originator of the modern seduction community. He became interested in NLP (Neuro-Linguistc-Programming) and Eriksonian hypnosis in the late 80's and early 90's and used it as the basis for his Speed Seduction method.

NLP has various definitions including that it is the study of subjective experience and that it is an attitude and mindset that leaves behind it a trail of techniques. It originated as a form of therapy and positive psychology techniques and is now used in many areas of self-help in order to help practitioners and clients live more effective and fulfilling lives. Speed seduction uses a combination of NLP and hypnosis techniques to help women access various positive states of mind which are then associated with the speed seducer.

Early versions of Speed Seduction focused on several areas. First, having more empowering beliefs about women: that they enjoy sex and that you should not supplicate to them. Inner game techniques to help men feel more confident around women using for example anchoring and hypnosis techniques. Finally techniques focused on creating various positive states in women. These include fascination, intrigue, connection and attraction amongst others. These latter states are often induced through language patterns and stories. These rehearsed stories are designed to elicit specific emotions and feelings in women.

In recent years Ross Jeffries has moved away from strict use of rehearsed patterns and more towards the spontaneous creation of hypnotic language, building confidence through inner game techniques as well as yoga and meditation techniques.

"Leave her better than you found her." "I never know what physical type a woman will go for so I always go for it congruently and powerfully." "Love, fascination, desire, lust are not 'things' but processes that take place in the human, mind, brain,physiology and neurology." "The kind of questions you ask yourself control you think. Therefore it is crucial to learn to ask new, better, different and empowering questions than the ones you have been asking and the ones you have been taught to ask." "Successfully attracting / seducing women is about how you can capture and lead their imaginations and emotions." "Whatever you can get a woman to imagine will be perceived by her as being her own thoughts, and therefore will not be resisted." "Beautiful women create altered state, the combination of internal dialogue, imagery, physiology, flows of sensation, beliefs and attitudes, attributing meaning. Will you go into an altered state that is useful for you?" "If you are going to build an auto-pilot, why not build an auto-pilot that flies the plan in stead of crashes into the ground." "Learning and skills are state dependent and your state can be designed controlled and created by you." "I never get rejected, I only discover if a woman has good taste." "When I don't know what to do, I take a bold step forward." "You let action and reality teach you what will work rather than your worry, guessing or speculation." "I make no apology for my desires as a man."

Ross Jeffries was a comedy writer who discovered NLP (Neuro Linguistic Programming) and Eriksonian Hypnosis in the late 80's and early 90's when he trained with the co-creator of NLP, Richard Bandler.

In 1992 he created his first product and soon thereafter started teaching seminars on Speed Seduction. Ross was the first person to create a business around seduction products and seminars.

Ross Jeffries discovered NLP and Eriksonian Hypnosis in the late 80's and early 90's which he used as the basis to create Speed Seduction. His first product called How To Get The Women You Desire Into Bed was created in 1992.

It was a course that taught men how to use NLP and hypnosis to lead women into pleasurable states. Some of the techniques that were taught were, embedded commands, quotes, weasel phrases, trance words, anchoring and deep rapport building. This method is especially famous for the use of rehearsed language patterns or stories which were meant to be memorized and told to women in order to elicit specific emotional responses such as intrigue, a feeling of connection or arousal.

Soon after releasing his course Ross started holding the first seminars teaching men how to improve their skills with women. This was a commercial model that would later become a standard in the industry.

In 1998 Ross set up alt.seduction.fast a discussion group on the old usenet platform so that his students could discuss his teachings. This was the first online discussion group were men could help each other learn seduction skills. It soon expanded into teaching a variety of seduction techniques and tactics besides Speed Seduction. It is the group where many of the earliest pick-up gurus such as Mystery and others first started discussing their techniques and tactics.

Ross continued to be a major player in the dating advice industry when he was featured in the book the Game (2005) by Neil Strauss and on an episode of Dr Phil in 2006. Since then, however, with the huge number of new methods and skills being taught his position of dominance has slowly been eroded. Part of this was due to the "Speed Seduction" approach becoming less popular, with students favoring Mystery's style of pick up artistry or other newer approaches termed "Natural Game".

In recent years Ross has refined the original Speed Seduction course focusing less on memorized stories and patterns and more on teaching students to come up with their own hypnotic and arousing language on the fly.

There is also a much stronger emphasis on empowering beliefs and inner game to help students feel more confident in their interactions with women.

What other dating coaches have said about Ross Jeffries

In October 2010 Ross Jeffries announced to all his students on his email list with photo that he had a new Danish girlfriend, Christina. He said about Christina and the relationship:
"This lady is really sharp: she teaches persuasion, sales and even pick-up (to guys in Denmark!). She may even inspire me to do a course on…gulp…real-hate-shun-ships. I’ll keep you posted and remember: even seduction gurus can and do fall in love!"

In 2003, at Ross Jeffries' London Speed Seduction Seminar, Ross re-enacted Tom Cruise's opening scene in Magnolia, including the featured music from the film.

Help us improve this profile of Ross Jeffries by sending us any information you believe to be missing, wrong or lacking detail or good quality images we don't have. Please state sources where possible to make our job easier to verify the correctness of the information.