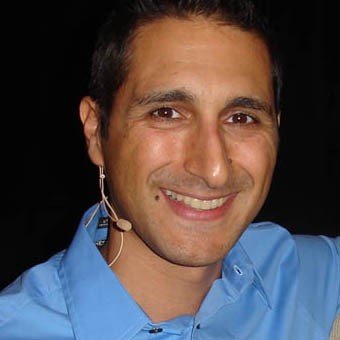 David DeAngelo is the alias name of the founder of the "Double Your Dating" company. His real name is Eben Pagan, for which he is now also widely known in business and entrepreneurship circles.

He is an acknowledged dating advisor and entrepreneur and is considered to be among the elite in the dating industry. David has been invited to countless interviews (both through radio and television), and has been given prominence by many articles on various magazines and newspapers.

Having more than 1 Million subscribers to his daily newsletters and products, DeAngelo operates the largest dating company in the industry today.

Commercial Alias Name: David DeAngelo (before 2001 was known as Sisonpyh)

The foundational principle of DyD (Double Your Dating) is that "Attraction is not a choice." You hear this repeated throughout many of David DeAngelo's courses. It means several things:
1. You cannot logically convince a women when to feel attracted.
2. Her attraction is not under her control. It's not her choice. It just happens to her. She does not choose to feel attracted to a man.
What this means is that you must make her feel attraction, and not try to talk her into being attracted.

The DyD approach to making her feel attraction includes some of the following tools and concepts:

The "Cocky and Funny" approach. This is by far the most notable advice from Deangelo. This method can trigger the law of attraction between man and woman by the use of traits such as blitheness, humor, independence and inner game or confidence. This method subtly overcomes the misconception that men must rely on physical appearance or material possessions to attract women.

Other innovative concepts Deangelo developed are the following:

Eben Pagan, most commonly identified as Double Your Dating's founder David Deangelo, was born on the 5th of December 1971 in New York City. Today, he is renowned as a successful author, dating coach, and entrepreneur.

Initially, Deangelo started his career as a real estate agent and began learning and studying sales. He next continued to develop his understanding of sales with marketing skills working in a seminars and training business for entrepreneurship and sales. At this time he had also begun studying dating.

His success as an entrepreneur started with the "Double Your Dating" brand which he built from 2001 and is still going strong today. From there he expanded to provide advice to other markets such as business advice. Some of his work has led him to work with big names like Richard Branson and Tony Robbins. He is one of the most successful business men having got their start in Internet based information products (like dating courses).

He is married to Annie Lalla, and lives in Santa Monica.

David DeAngelo originally began learning about dating advice in the late 90s as a student of Ross Jeffries. During this time he went by the alias name of "Sisonpyh". The alias "sisonpyh" (hypnosis spelled in reverse) was a tribute to Jeffrie's teachings on Neuro-linguistic programming.

In addition to Ross Jeffries, DeAngelo sought out other dating gurus to learn from. These included Eric Von Sydow (Hypnotica), Dave Ricker, and Steve Piccus.

On December 17, 2000, Deangelo began to develop his own insights and later presented it to the world through a seminal posting on "Cliff's List", a renowned internet newsletter in the dating community.

A year thereafter, in 2001, Deangelo singlehandedly started the company "Double Your Dating" using his pen name "David Deangelo" for the very first time. As a new company, the only product Deangelo had available at that point in time was his modified and elaborated version of the seminal post he introduced the previous year. He entitled this product "Double Your Dating EBook". The book became a smashing success and from then on, Deangelo and his company has been providing excellent dating advice for men.

Since the later part of 2009 up to the present, Double Your Dating has employed more than eighty people, all of which are operating from remote locations. Now, Deangelo is one of the most popular (and rich) dating coaches in the world, making over 20 Million dollars in sales per year.

DeAngelo (Eben) has moved on from his career in dating advice to explore other careers (e.g. business advice as Eben Pagan, and promoting innovation in children's education). His Double Your Dating business continues to be run by his organization, but no new dating advice is being developed or new products created, and he no longer runs seminars or conferences.

Eben has always kept his dating life relatively private and has been seen with very few women over the years, although he talks about his girlfriend experiences in his DVD programs.

Recently in 2010 he appeared with his girlfriend Annie Lalla at Burning Man 2010. Annie Lalla is also a dating & relationship coach or what she likes to call an 'intimacy expert' so they are well suited.

Eben got engaged to Annie in a ceremony in early 2011 and they married in August 2011. He now has a baby daughter with his wife Annie, born in 2012.

Help us improve this profile of David DeAngelo by sending us any information you believe to be missing, wrong or lacking detail or good quality images we don't have. Please state sources where possible to make our job easier to verify the correctness of the information.