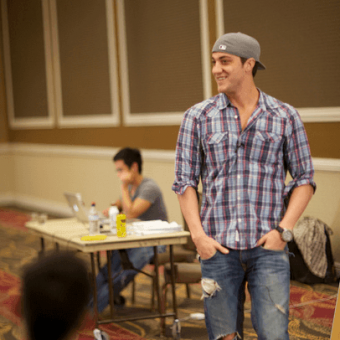 Braddock is one of Love Systems' master instructors and one of the most active in their products and media exposure.

He is best known for text game and social game for which he led the development of both of Love Systems' related products.

Braddock is from one of the Northern states in the U.S. where he also went to college.

He became a dating coach shortly after graduating.

Nick (Braddock) was relatively popular with women at college as a 'frat' boy. However he wanted to get to know women outside of his social circle, and this is what led him to Love Systems.

He originally helped out on bootcamps as an 'Approach Coach' with the early instructors (The Don, Sheriff, Mr. M, Tenmagnet, Sinn, Future, and Savoy). He supported just The Don on 25-30 bootcamps, so the total invested hours was high.

The Don and Mr. M both remarked on Braddock's near obsessive note taking while he was learning. Everything got noted down during seminars he was sitting in on, and he kept binders full of notes to review. It is a practice and habit he continues for product creation and for other aspects of his life.

He became an instructor for Love Systems in 2007 and got promoted to master instructor in 2008.

In 2008 he moved to Los Angeles, living in an appartment with Dahunter, and running bootcamps for Love Systems in L.A.

Braddock claimed on his blog that he hooked up with one of the Singers from the Australian Group Raen in September 2008 (see Raen's Facebook page).

Love Systems' Savoy and Braddock on the Tyra Ba...

Help us improve this profile of Braddock by sending us any information you believe to be missing, wrong or lacking detail or good quality images we don't have. Please state sources where possible to make our job easier to verify the correctness of the information.