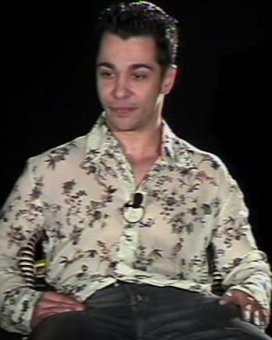 Swinggcat was one of the early innovators of "The Game" and a member of the Seduction Community in the late 1990s, studying under Ross Jeffries.

Later he created his own original approach that later became very popular and has since been integrated into many of the approaches used by other dating instructors.

Prizing: Using an approach where you assume act like you are the prize with women to attract them.

Push and Pull: Using pushing where you charm a woman and then pulling, where you pull away from her, to attract her. This was also sometimes called 1-0-1 to reflect the on-off nature of the interaction.

Little is known about Josh's background as he prefers to maintain his anonymity and keep his personal life separate from his dating, pick up artist and seduction activities.

He has been based in Los Angeles, California for the last two decades.

In Neil Strauss' The Game, Swinggcat is portrayed by the character Grimble.

Swinggcat was one of the early students of Ross Jeffries in the 90s alongside David DeAngelo.

In the early 2000s he branched out with a completely different approach to attracting women primarily based on what he calls prizing and quick escalation that seemed to get him more success than any of the other systems that existed at the time.

This style first emerged when he began reporting seemingly unbelievable results such as making out with women after meeting 1 minute earlier and other very rapid physical escalation and instant attraction. He became well known for this approach, and the alias name he took on "swinggcat" reflected this player-cat-like approach to meeting women.

Today, a lot of his theory has been integrated in some fashion into the dating and pick up systems used by most of the popular dating companies. His ideas have gone down in history as true innovations in the field of dating science.

Swinggcat does not do any personal training or coaching. The only way he has transferred his knowledge is either through his personal friendships in the early 2000s (e.g. Neil Strauss and David DeAngelo and later via the books he has published.

His most known of the few public appearances he has made was in one of the early David DeAngelo seminars.

Help us improve this profile of Swinggcat by sending us any information you believe to be missing, wrong or lacking detail or good quality images we don't have. Please state sources where possible to make our job easier to verify the correctness of the information.