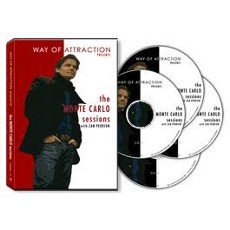 "Challenging Perspectives on Our Relationships with Women"

Last Update: May 16, 2022
The Good
Harsh truths that have to be faced, doesn't pull punches, mature perspective on relationships, putting dating and relationships into context of life
The Bad
Some rambling 'unclear' advice
The Bottom Line
A product to challenge your perspectives on relationships with women and how they relate to your life. Most relevant to you if are in your 30s or older, or you take a mature and long term view towards relationships, have a lot of dating success but remain unsatisfied by relationships.

It comes with 2 audio CDs (Session 5 and Session 6), the original Monte Carlo Sessions making up Sessions 1 to 4.

If you don't know Zan Perrion, read a bit of background on him in the Zan Perrion profile to get to know him better. He differs from many of the dating gurus for being more mature (he's in his 40s), experienced and also more focused on living a full life and full relationships (far away from the idea that life is just about picking up girls in bars).

Are you a fan of David Deida's work such as Way of the Superior Man? Zan's work builds on and around similar concepts and ideas while offering a very different 'romantic' view on life at the same time. Studying both these men and their advice is something I'd recommend for anyone interested in establishing more meaningful and longer term relationships with women.

Note: If you are still in your early 20s or late teens, you are unlikely to be at that stage where Zan will be teaching you something you want to learn - life's a journey - and it has stages with different needs at each stage. While his advice is really valuable to all age groups realize you may not be at the point where you want to engage with his style of advice if you are still early on in your journey as a man.

Challenging Perspectives on How to Attract Women

Most of session 5 has Zan explaining and giving examples of how he approaches women and how he sees the process of attraction between men and women.

His perspective challenges that of some of many of the teachers of pick up artist based dating advice - in particular where it comes to who has the control and how much control you have in the process of attraction. Most pick up artist methods focus on 'taking control' of situations while Zan Perrion's encourages you to 'let go' more.

Attraction is kept simple and straightforward focusing on the few things that Zan sees as important (which includes a much smaller set of things to keep track of than most approaches to attracting women).

In my opinion some of the good pick up artist methods will get you more short term success with women (especially if you are less experienced with women), but Zan's is the path to longer term satisfaction with your dating life. Valuable stuff, and challenging for those who have been working with pick up artistry for a while.

One of the messages that comes through in these sessions is that there are 'No magic bullets' to improve your dating life ultimately. He discusses the issues as he sees them with 'self development' and how he thinks men really transform themselves.

Other noteworthy perspectives he brings are the aspects of your journey in relationships and your self that will continuously be an ongoing process of work.

It is one of the clearest descriptions I've heard on the process of improving how we deal with relationships with women over the longer term to date.

This material is valuable to people who either have not yet really bitten the bullet to change their dating life despite having hovered around dating advice for a long time (if you've known about dating advice for years and nothing has really changed - that's you). It will also provide useful ideas to those who despite having changed their dating life in many ways still feel that they are 'not yet there' particularly in relationships, and there is some magic bullet left to click in place.

Relationships Philosophy and the Life Journey

In session 6 Zan delves into how you need to be to get satisfaction from your relationships in life and how 'relationships really are'. This gets deep as he explores philosophies for healthy relationships and how you approach life.

He touches on links to 'self development', the pickup artist and seduction community movements and how it all fits into the journey of life.

Scenarios for Application to Your Life

As you've probably got by now, this is a good product, but it isn't suited to everyone depending on what they want and where they are at in terms of learning and development. I realized that in order to be helpful it would be better to try to nail down some scenarios and situations where you will get the most value from it. These include:

Some Weaker Rambling Parts of the Course

In particular in session 5 there are parts where the discourse rambles a bit and loses its focus touching on a variety of ideas about life and how it should be lived.

On the upside, these are personal to Zan, and offer insights into his psyche, however it's harder to get value from this unless you are committed to studying and modeling Zan's approach to life and relationships. Most people are not and will overlook this value as it's harder to access.

End result: You may get bored and feel disappointed with these parts - even getting a bit confused as to where he is going with it.

This is a good product and well worth the time and money invested in it. The question is: Is this product right for you now?

If you are in your 30s or older, or you take a very mature and long term view towards relationships, have a lot of dating success but remain unsatisfied by relationships - the answer is Yes.

This is the second installment of the course The Monte Carlo Sessions. It aims to address and answer questions from the first installment.

Disc 6
- Greatest things you can give to the world
- Complimenting a woman
- Friend-zone
- Being funny, cocky, and charming

$47 (+ shipping) applies only to:
- Those who purchased The Monte Carlo Sessions (or the Get Everything package)
- Select members of naturalgame.com forums
- Invited members of their Facebook group

How To Approach and Flirt With W...
DSR Editor Rating0.0
Average User Rating0.0