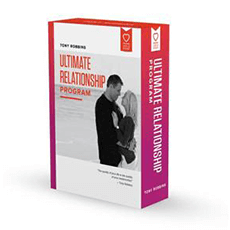 "A Bit Deep and Technical at Times, But Will Be Valuable for Relationships in Trouble"

Last Update: November 27, 2022
The Good
Great live demonstrations of how to overcome real women's tests in relationships. Useful toolkits to diagnose issues in big issue relationships.
The Bad
Expensive for what you get. DVD 6 was underwhelming. The sophisticated psychological tools may go over some people's heads as not easily implementable.
The Bottom Line
Recommended for guys in relationships that aren't working out, or who have a history of relationships that didn't work out and want to make sure they are better prepared the next time around.

Especially for very difficult and tense relationships with a lot of history.

If you are shy of spending many dollars on dating advice however, this will be too expensive for you.

Anthony Robbins isn't traditionally a 'dating guru'. He provides advice and coaching on a much broader area of 'self development'. He is not the only self development guru to provide dating or relationship advice, and there are many different sources you can get quality advice from outside of the traditional dating coach and pickup artist realms.

How Relevant is this Product to You?

This product shows Anthony Robbins coaching couples in extremely dysfunctional relationships that are about to end back into health. It provides footage of the interactions between the couples live on stage in his seminars. It was a surprise product for me. It had a few things going against it in my mind when I went to watch it - which I thought would render it a pretty useless product. I was wrong.

Despite these, I found the content largely remained relevant to any guy in a relationship. Anthony Robbins' approach sticks to fundamental principles behind a relationship, so are actually more broadly applicable than these specific situations. In addition, the fact that it was a product for both men and women, in my opinion, makes it much more useful - read on to see why.

A Surprising Source of Value

I had thought that the lack of focus on men, with Anthony advising both men and women would detract from its usefulness to guys. It turns out exactly the opposite was true.

Seeing the interactions between women and men in relationships on the videos added a dimension I haven't seen in any other product. You get to see both sides of the equation, you get to see Anthony's coaching of the women which gives you more insights into their perspective, and most importantly you get to see the effects of different male behaviors on the moods of the women with Anthony often pointing out what has happened. This is something I haven't seen in other products. So great to see.

Where this Product Excels

What you see vividly time and time again in this product are women testing their husbands. You see it in multiple ways. You see Anthony Robbins point it out when it happens, telling the guy that she is just testing him and to press on with what he was doing. The beauty of it is, that there are many extreme examples.

I consider that I've been with some extremely dramatic girls in my time, one was bipolar, and I know of only a few senior guys in the dating advice community who have had similarly crazy girls on their hands. I tell you this, because some of these women exceed or parallel that type of behavior.

So if you want to see just how rough tests can get - and know what you should stand up to and have to overcome - there is some really good footage here. Some solid examples of standing strong against a torrent of emotions from a woman.

Anthony Robbins guides the men through passing these tests and coaches them on it. You will find the advice he gives here very similar to that you may have read in The Way of the Superior Man or Become Mr. Right.

Advanced Psychology - Not for Guys Who Want to Fire and Go

Anthony uses some relatively sophisticated tools from the world of psychology for some of this seminar. It gets heavy. In other words, unless you are committed and can get a reasonable grasp of and apply psychological principles rigourously, much of the content may just go over your head and never get used. For guys who want to finetune relationships, you should be up to it. For guys who have more basic issues, there is still content for you to get, but you may get distracted by the 'psychological toolkits' from what you should be focusing on. Definitely not a product for beginners without much relationship experience or know-how.

What You Should Know About This Product

The DVDs and the Audio files are the same footage (you just get to watch or listen to the same thing).

However, you SHOULD watch the video, it will give you far more insight into what Anthony is teaching. If you listen to the audio you would be missing a lot of the value.

You would not see the body language and expressions that the people getting coached communicate, and which Anthony Robbins is continuously calibrating to, and pointing out. To watch the audio, you'll only be getting 10% of the value - literally.

Looking quickly over the 6 DVDs - They are all good, with something to learn from each with the exception of DVD 6. "You come first - the power of alignment". This DVD was less useful than the others. Funnily enough, the main reason for this is that you only have a guy coached on his own without his wife in it. The focus on just the guy without the girl's interaction with him, took a lot away from the great stuff I'd seen in the other DVDs. To make matters worse, I really felt that the guy looked like he hadn't resolved things when Anthony Robbins came back to interview him 6 months later. I'd be willing to bet that a year down the line things were not looking so bright for him. To be fair though, the guy had not really applied what Anthony Robbins had coached him on - it wasn't due to bad advice. Bad implementation of the advice rather.

I'd recommend this product for guys in relationships that aren't working out, or who have a history of relationships that didn't work out and want to make sure they are better prepared the next time around. It will be particularly useful for very difficult and tense relationships with a lot of history.

- If you are price conscious - this isn't a good buy. It's pricey for what you get.

I'd add that for guys with a lot of experience this product may be useful to reinforce your view of the world, male-female relationships and how relationships fit in with the rest of your life. This product demonstrates that good dating advice from dating coaches from the self development, spiritual and seduction community worlds has more similarities than differences in it at the end of the day.

"Ultimate Relationship Program" is designed to bring more love, joy, and excitement into your relationship. It shows you how to reclaim the passion both you and your partner deserve. It is an approach for attracting your ideal mate and providing tools to maximize your relationship.

It includes a bonus Inspirational DVD.