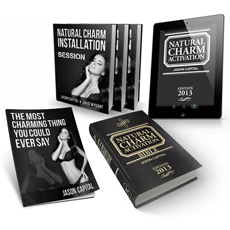 
See other courses and coaching
from Jason Capital Dating.

"Good Advice On Becoming More Charismatic And Charming, Better Suited To Guys With Some Experience"


Last Update: November 29, 2022
The Good
Focuses on teaching the core fundamentals that will make you a charming person. Plenty of practical examples are given. There are some good bonuses included.
The Bad
Video footage from the presentation cuts out during the last 20 minutes. This course is more expensive than Jason's other products. If you're a beginner some of this might be harder to implement.
The Bottom Line
This product aims to turn you into a naturally charming person so that you will become a charismatic person that is attrative to everyone. The focus is less on learning tricks and techniques, but rather attitudes and mindsets that become a part of who you are.

There is some good information here and overall it is a solid product. But if you don't have a reasonable level of social skills already, some of the advice here is easier said than done. If you're looking for some more detail-oriented advice from Jason, then check out another of his products, Make Women Want You.

The Natural Charm Installation System is primarily made up of video footage from a live seminar and runs for just under two hours. Jason Capital gives a presentation on what he believes it takes to become a charming man. The goal, he states, isn't to seduce one woman, but to seduce the entire world.

What he means by this is that you are the kind of person that everybody likes and wants to be around. So you're not just going to adopt an attractive persona when you go out to 'game' girls. You have to change into a person that is naturally charming with everyone. Essentially it's about becoming sure of who you are and moving through the world in an effortless way that just draws people in.

Something that is talked about here is how to set a new default state for yourself. This just means the state that you are in most of the time in your day to day life. Jason states that by consciously focusing on creating the kind of state he teaches, that after 90 days this will just become your default setting. This is going to take a fair amount of effort on your part, but will pay off in helping you to be a naturally more positive and charming man.

Jason defines charm as such: 'It is when someone you admire makes you feel significant'. To be admired, you need to possess a certain amount of value or status. This doesn't mean you have to be rich or hold an important job, it's more about being confident and sure of who you are as a man.

The course goes into the specifics of how a charming person acts and the traits that they possess. If you're familiar with dating advice then a lot of this won't be new information to you. A lot of it revolves around your subcommunications, as everything you do and say has more impact than just the words you use.

So you'll be getting information and demonstrations on things such as eye contact, body language, tonality, being unreactive and having a playful attitude amongst others. Jason comes across as very self-assured, fun and decisive, and does a good job of embodying the traits that he wants you to learn.

There's a really great example that Jason gives of a girl he was with in Las Vegas who didn't want to go out clubbing with him. He demonstrates exactly how he was able to get her to come out with him by 'changing her mood, not her mind'. This isn't a new concept in the dating industry, but it's one that I think many guys fail to properly understand. If you can get a solid grasp on how to do this properly, it will have an enormous impact on your relationships with women.

While you're able to see him demonstrate the various things he talks about throughout the seminar, for whatever reason the video cuts out about 20 minutes from the end. You can still here the audio and there is a written transcript on a black screen, but you can't see the footage. This isn't ideal, as he talks about some things that would be really helpful to see demonstrated. There's an eye contact and body language technique he describes, but you'll have to imagine how it looks as you can't see him demonstrate it.

Throughout this course Jason references numerous examples of actors and fictional characters who are charming and attractive to women. They each have their own style, but share a lot of common traits that help constitute the aura of charm that they possess.

There's three short videos included where Jason shows you examples of these and breaks down exactly what they're doing and why it is charming. So you'll see Daniel Craig as James Bond, David Duchovny as Hank Moody and Jude Law as Alfie, all flirting with women in a charming and attractive manner.

Aside from the videos, there are other examples mentioned, and it's easy enough for you to study them by watching the movie mentioned or checking clips on YouTube. Jason talks about how he has studied all of these different people and tried to emulate a lot of the different things that they do naturally. So you can definitely learn from some of these people and try to assimilate some of their behaviors.

Structured Learning Versus Being Yourself

If you were to boil down the core advice in this product, it is best summed up as be confident, be yourself and have fun. This is essentially what guys who are naturally good with women do without even really thinking about it.

When it comes to learning dating skills, this is ideally the level you want to strive for. Where you've internalized the concepts of what it means to be an attractive man and you can draw women into your life just by virtue of being yourself.

But for most guys they usually need to come full circle before they can reach this level. They need to become consciously aware of all the things they have been doing wrong and what they should be doing instead. Then once they start getting some experience and building positive reference points they'll naturally internalize a lot of the new attractive behaviors.

So if you're a complete beginner then you might find this product a bit too advanced for you. If you're not sure how to meet new women and what to say to them, you would be better off with something more practical that gives you step by step details on what to do. Jason has another product that is better suited to beginners, Make Women Want You. Alternatively, check out some of our other top rated products for beginners.

A good portion of the product is actually made up of extra content besides the main seminar footage. There are three interviews that Jason has conducted with dating experts David Wygant, Marni Kinrys and Richard La Ruina, all on the subject of charm. These inteviews are accessible as written transcripts, and contain some good information. In particular, the one with David Wygant stood out as being the best and contains some great wisdom as well as specific examples of how David uses charm to meet and attract women.

There's a short report by Jason titled 'The Most Charming Thing You Could Ever Say'. It only features one technique, but it's a good one and is a great example of how to be charming. You can take this technique and apply it with practically any woman, you just need to wait for the right opportunity to use it though.

Another report, 'The Charm Bible', was included as a bonus in Make Women Want You, so if you've purchased that product this won't be anything new. It consists of a handful of different tactics and techniques that are fun and playful, helping to make women attracted to you. If one of the problems you have with women is that you come across as too serious or boring, then this will be well worth a read.

There's also three short video clips that are pretty solid. One of them is on how to 'master your smirk', so if you're interested in how to have the kind of charmingly mischievous smirk that women love then this is worth a look.

Something that is a bonus and virtually a mini-course all its own is titled 'Her Best Kisser'. It's a series of six videos that attempts to show you how to kiss women in a way that they'll remember for years to come.

There's around about an hour's worth of video here all up, and it covers areas such as tension, touch, body language and physical moves. If you're not really confident on how to make your move and kiss a girl for the first time, Jason gives you some scripted routines you can use that cover what to say. He actually has a couple of women demonstrating this and then kissing each other. They are also demonstrating some of the physical moves in another video while they make out with each other.

This product aims to turn you into a naturally charming person so that you will become a charismatic person that is attractive to everyone. The focus is less on learning tricks and techniques, but rather attitudes and mindsets that become a part of who you are.

There is some good information here and overall it is a solid product. But if you don't have a reasonable level of social skills already, some of the advice here is easier said than done. If you're looking for some more detail-oriented advice from Jason, then check out another of his products, Make Women Want You.

This system by Jason Capital teaches men how to install the gift of natural and effortless charm. The system presents techniques to become charming without using ridiculous pickup artist tactics such as pickup lines, hypno-seduction, and manipulative words.

- Avoid being seen as an evil charmer
- Creating admiration and respect
- How to create a mesmerizing effect on women
- Flirting secrets and natural charm techniques
- How to talk to a girl that shows attractive characteristics
- Naturally validate people so they like and agree with you
- Naturally invalidate or challenge others that are not in agreement with you
- Getting what you want in interactions, without mind games, NLP, and psychology
- A foundational formula of charm for charming “the socks off” a woman
- How to present your best self by establishing a charming state naturally and automatically
- How to establish a relaxed and playful vibe so others are relaxed and open around you
- The master keys to a charming presence and making your presence felt
- Freely speaking your mind without upsetting people who disagree with you
- Amplifying a high status presence without high status assets (e.g., money, house, car)
- Reinforcing the techniques so your charm is natural, automatic, and subconscious
- How to be non-calculated in your approach to being charming and attractive
- Conversation techniques such as past adventure projections, teasing questions, and false dis-qualifiers