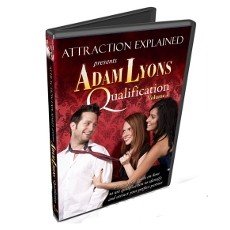 The "Adam Lyons Qualification Volume 1 & 2" provides you techniques that will help you to develop your own style in dating and to ensure that you are dating the exact type of women based on your preferences and qualifications.

- Talk directly to someone’s subconscious mind.
- Handle the “I have a boyfriend” response.
- Use Preloaded Questions to influence her thinking.
- Decide exactly who you want to be dating.
- Spend your time talking to those you really do want to date.
- Use identification to find out how she’ll behave in certain key situations.
- Use investment to make the other person work harder than you.
- Increase investment to increased attraction.
- Detailed coaching on the art and craft of beginning and maintaining engaging conversations.
- Dating you in the way that you want.
- Techniques of forced learning.

"Mostly BS and Hot Air.. with some useful ideas thrown in."

he says, “this is an incredibly powerful technique” on every other page. And it's just something basic.


He says, “If you say, “You know what? I haven't had a McDonald's for ages; I'm craving that really bad crabby food.” Then you're tapping into her inner subconscious, you're getting some aims and her desires and that's where you want the conversation to be. You want to be getting that really deep stuff.”

First of all, I'd like Adam Lyons to show me the “outer subconscious.”

Seriously. I can't make this up. I want to scream at the pua author who writes this kind of stuff. He basically tells you to say, for example, “Hi, HB9, I'm Adam Lyons. It's a nice day out today. What do you see down the street?” Then he tells the reader that saying that paragraph is 'tapping into her inner subconscious, and tapping into her innermost desires and making her feel that she's known you forever.'

"Now I want you to read this next bit carefully because it's absolutely the key to your understanding of the concept.

What I did just then was use pre-loading on you. I told you that what you're about to read is going to be incredibly important. All of those words were pre-loading. I tapped into your subconscious mind and gave you a suggestion that what you're about to read next was incredibly important.
You see this a lot with somebody is about to tell a joke. he will say, "Hey, listen to this, this is so funny!" and they tell you a story. They've pre-loaded it; they're tell you that the story's funny beforehand, essentially giving you the suggestion that you need to laugh at the end, whether it's funny or not. Those subtle cues are something that human beings do all the time."

Look at the above. He didn't "tap into my subconscious."
Instead, he overtly told me to pay attention. Wow. So subtle. So clever. (not really).
He just took the most commonplace sentence,
then invented some fancy word "pre-loading,"
and told us that it was magic, hocus pocus and subtle.


What a bunch of bull. Adam Lyons isn't the only PUA who does this. I've seen several other PUA authors write out a story to tell a girl, then the guru spends an hour dissecting how genius and clever the story is. When really, it's just a story.

I expect next we'll hear some guru come up with a cleverly constructed story that uses each letter of the alphabet the same as the other letters, or doesn't use the letter N anywhere in the story, and since “needy,” starts with N, and you can see for yourself when you read it, this story's gonna reverberate ripples of ecstasy down a woman's body whoever hears it.


What did you want to be when you were 5 years old?
He offers this as a qualification question.
That's fine I guess, it's better than his previous one, “Do you like McDonald's?” But I can't see how these are qualification questions.
What does the answer have to do with how qualified she is to be with him?
Especially, "Do you like McDonalds?"
No hot girl is going to respond to that by thinking,
"Interesting. I've never met a man so confident and sure of himself
that he'd ask me whether I like McDonalds. He must be important."

Second thing I dislike about this question is, I can't even remember what I wanted to be when I was 5.
And sure enough, the 1 girl I tried this question on... couldn't remember. I was finger-painting in school. I didn't even know the alphabet.

Get this...this really irks me...his next question, I hope no guy ever asks a girl.

“Why did you give up on your dreams?”

That's an Adam Lyons qualification question!
There are several things utterly stupid about that question.

1. It assumes that anyone who is not what they wanted to be at 5 years old gave up on her dreams. Is she not a princess, after all? She gave up on her dreams and she's a failure. Are any of you men reading this not a fireman? You gave up on your dreams. I wanted to be a kids birthday party clown when I was 5. I guess I 'gave up on my dreams.' Here's a smart idea...maybe in 20 years of living, you grow in wisdom and develop mature goals, and it's not about giving up on dreams but about getting more ambitious goals.
2. Again, it's not a qualification question. I'm still waiting to here a question that remotely suggests that I'm qualifying her as a potential mate. I'm waiting for a question that sub-communicates, "Are you good enough for me?"
3. When someone tells me that I gave up on my dreams, it makes me sad.
This is not fun and shouldn't be where you want your girl.
4. Maybe Adam is used to dealing with dumb girls who don't think much, but I'm sure if I asked a girl why she gave up on her dreams as a 5 year old, she'd immediately think I was being silly or think I was plain stupid for suggesting that.

page 89: When asking the question, “Okay, well what's one interesting thing you've done lately?”
He refers to the sales technique “door-in-the-face,” but Adam not only calls it “face in the door,”
and also gets the technique absolutely wrong. I don't know if Adam has trouble with comprehension or with teaching, but the door-in-the face technique is where you first present the client with an absurd thing they don't want...then you tell them the reality of what you want them to do.
The idea is that then they will feel overjoyed to do the latter.
For example, a girl wants to tell her parents that's she's engaged. She's only 19 and she knows that her parents will disapprove. So she tells them that she's pregnant and has decided to get married this week to Boris, and move with him to Russia. When that sinks in, she tells them that the reality is that she's not moving to Russia, and she's not pregnant, and she's only gotten engaged to Peter. Now her parents feel relief at the discovery of their daughter's engagement, instead of disapproval.
THAT is the door-in-the-face technique.
Another example is that you've just decided to marry a girl,
and you know you're parents will disapprove.
Using the door-in-the-face,
you might tell your parents that you are gay,
and you met Clarence, who is 20 years older than you,
and you're both moving to Kuwait to get married.
Now you're parents are devastated by this news...
and that's when, to their great relief, you tell them
that none of that is true...but you have decided to marry a girl, that's all.
That's door-in-the-face. Adam Lyons has no idea what he's talking about.

What Adam described is called “nibbling” in negotiation,
and the “foot-in-the-door” technique in sales (not door-in-the-face).

So I feel he is not qualified to be a teacher.
Even if he is great with girls, I don't care whether the teacher is great,
I care whether his students become great.

It would be like a 9 year old who heard about Algebra from his older brother, and is trying to convey the concepts to his 4 year old sister. That's what Adam's teaching is like...all muddled.

Here's an excerpt: “One of my favorite things I like to say to somebody is, 'Tell me 3 interesting things about yourself.' I like this question because it tells me things that they find interesting.” This is not groundbreaking.

Also, through over 100 pages, Adam never refers to the girl as “her” or “she.” It's always “this person,” or “their” or “them.” Makes me wonder whether Adam is trying to seduce men as well as women. It can also get very confusing for the reader.

It almost sounds as if he wanted a higher page counted, so he went through every page and changed “her” to “them” or “somebody” or “this person.”

I wish this book were translated into clear, precise English.
As it is now, it's difficult to comprehend (not because the content is packed with helpful advice,
but because it's littered with grammatical errors and BS fluff).


Comments (0)
Help other users find the most helpful reviews
Was this review helpful to you?