How To Make Her Want You 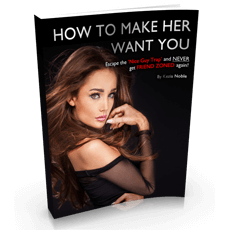 “How To Make Her Want You” by Kezia Noble is designed to show men how to get out of the friend zone to become attractive and desired by women. This ebook aims to show you how to become:

It also explains how to replace nice guy game with strategies of the “naturals” that work, as well as improving your low interactions with women to be more successful.

- Sexual escalation techniques
- Mind management techniques
- The art of playful seduction
- Steps to free you from the friend zone
- How to project strength and confidence
- Principles of the attractive male character
- Mastery of radical honesty and unapologetic truth
- Eliminating obsolete ‘nice guy’ tactics and game plans
- Techniques to generate evocative responses from women
- Micro tactics to create early shifts in her perception of you
- How to eliminate shame, embarrassment, and uncertainty
- The empowerment of recognizing you are a “love machine”
- How to turn a negative response into a positive outcome
- Conversation techniques to help you stand out from other men
- Techniques to create a strong, positive impact with the women
- Strategies to change your current situation with her into the one you want
- A system that is congruent with your principles, life style, and personal values
- Attraction triggers to spark a woman’s interest in getting to know you, seductively

User Reviews of How To Make Her Want You

"more garbage from the gold digger "

so after getting countless emails from kezia, promoting this book, i knew i had to get a copy and check it out.. i already know what was gonna happen but decided i just had to see it.

as predicted, its just the same garbage she's already released. she has NO new material, and why would you? theres only so many different ways to pull a girl... this book just tells you the way you already know, because they are in her first book, on her dvds and in her bootcamps. theres nothing new to learn.

so why even bother releasing this? for the money obviously. she doesnt care about anything else, shes only in it for the money. she enjoys scamming virgins out of their cash.

this isnt even a real book, thats how lazy and half arsed her products are. it's an E-Book.. LOL an e-book.. wtf,?? lol

and its only about 30 pages long.... you won't learn anything new here guys, you just won't... theres a whole new breed of coaches out there now that can teach much better stuff... kezia and her team are old hat... they are still doing club game in tiger tiger..... not one of them is doing daygame, because they aren't good enough....