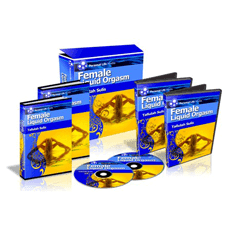 "Good Resource For Couples To Learn About Female Ejaculation; Might Be Too 'New Age' For Many Men"

Rather than just teaching you a technique that you 'do' on your partner, it focuses more on exploring her body and communicating to find out what she responds best to sexually. Compared to other products that women might feel uncomfortable watching, this is probably most effective if you learn from it together.

Some of the advice is not the best, so just discard anything that doesn't fit your style. There's also some weird hippy-type stuff in some of the videos, so just do your best to ignore these elements and focus on the bigger picture if you can.

Female Liquid Orgasm is authored by Tallulah Sulis, an expert in female ejaculation. She has a background of teaching workshops to men and women separately, as well as to couples. So the perspective she brings is somewhat different from a lot of other products on the same subject, who are taught by and aimed at men in the dating industry.

This product comes from the assumption that you are in a loving relationship with a woman and want to learn some new ways to help her have a more satisfying sexual experience and deepen the bond you share.

So a good thing about this product is it's safe for you to watch with your girlfriend or wife - it doesn't have any references to the pick-up community that you might feel uncomfortable with if she questioned you about. It's also pretty much exclusively based on her pleasure, so it reflects that you are wanting to do this for her, not to stroke your own ego.

The way that Tallulah communicates, I think that a lot of men are going to have a hard time getting into the book. Her communication style is more appropriate for women, and it didn't resonate with me at all. Even though it's only 68 pages, I found it difficult to make my way through it.

I lost count of the number of times she describes everything as 'yummy'. Yummy orgasms, yummy juices, super yummy oral sex etc. And a woman's pussy is constantly referred to as a magical gem, a flower, yoni; her labia as petals and a whole host of other metaphors that just got on my nerves. It's the kind of writing style that women are more likely to respond better to, and seems as if Tallulah hasn't really considered her main audience while writing this.

Aside from the language used, the way it has been formatted doesn't make for the most pleasant reading experience. For example, on the first page of content there is a single paragraph that contains 21 lines. It makes it incredibly difficult to read and absorb the information when it is in large chunks of text like this, compared to breaking it down into more easily digestible paragraphs. This is mainly a problem in the first half of the book, as it gets better after that.

There's also a number of typos in the book, which aren't normally a big deal unless it affects the intended meaning. One of the exercises that is suggested involves placing one of your hands on your partner's pussy and the other on her heart. Except that in the book it says 'your' heart instead of 'her' heart. For people who don't read the book all the way through and see it written again correctly, they'll be doing the exercise completely wrong.

Learning By Reading Versus Seeing

When it comes to learning specific sexual techniques, it can be tough to do from a book. Particularly if you have less sexual experience, you don't have as many reference points to relate the information to.

In this product Tallulah recommends that you read the e-book first, and there are also audio lessons to accompany the corresponding parts in the book. The audio lessons are short, a few minutes each, and cover the same points as in the book.

It would probably be better to go through the book in sections and then watch the video that goes with it. Ideally, there would have been links to the corresponding video placed in the e-book so that you would know when to watch each lesson. Instead, there's actually two different video series and you'll sort of have to figure out for yourself which ones to watch at the right time if you want to stay in tune with the book.

A lot of the techniques such as g-spot stimulation and clitoral stroking are best learned by demonstration, hence why the videos are more effective. There are extreme close ups of the vagina in some of the videos, to help point out the different parts you should be focusing on. Real life people are shown here, so it's a realistic portrayal of how these techniques look in action.

How It Differs From Similar Products

Aside from focusing exclusively on couples, it also has more of a spiritual undertone to it. This is really common when sex is taught from an eastern philosophy or Tantra viewpoint, which is clearly an influence in this product.

While some women might cry and release pent up emotions from the experience, I'd say that among the general population this wouldn't be a common response. Whether you choose to focus on trying to explore this deeper emotional aspect of the product is totally up to you and might depend on what kind of relationship you're in.

Some of the techniques are quite intimate and might include a degree of discomfort at first for one or both of you. Things such as using a handheld mirror and together exploring her pussy, and you telling her your favorite parts of it and what different colors you see, might seem like a strange idea. Do what you're both comfortable with and let things just progress naturally. This is an example of why this product is really only for couples, as doing things like this with a girl you don't know well will have her running out of your bedroom.

Other products that teach female ejaculation mainly focus on g-spot stimulation and show you a fairly simple technique using your fingers to do that. This product shows that technique, but also focuses more on clitoral stimulation and how you can combine the two for a blended orgasm. Tallulah explains how some women can ejaculate better from clitoral stimulation, and goes over a number of different things to try that she may respond to.

Aside from manual stimulation, there is also some information on oral sex and different sexual positions you can try that are going to be more effective in stimulating her g-spot. For many women it can be more difficult for them to orgasm from penetration, but for other women it can lead to the most powerful orgasms they've experienced. This is one you can have fun experimenting with and see what works best for her.

If you follow the advice in this product and communicate with your partner about what techniques she finds most arousing, you should be very successful in helping her experience more intense sexual pleasure.

While Tallulah is well aware that women respond to different approaches physically, she doesn't point out that they also respond to different things psychologically. She makes some of her instructions sound like they are the right way to do things, when in reality this might not be the case.

There is a need for most women to feel safe when they are having sex, but as she's in a relationship with you it's pretty likely she already feels safe with you. I would say that most women are actually more likely to be turned off if you engage in this type of approval seeking behavior while in bed with her. Most women actually much prefer a man to take charge, lead the sexual experience and do what he wants to do without asking (within reason).

Most women prefer a man who is dominant in bed, and by following all of the advice here to the letter, you risk coming across as the opposite. The focus is on creating security, safety, trust and respect, but misses the point that many women get sexually turned on by danger, spontaneity, risk and being submissive.

So the physical techniques themselves are effective, but for some women if you are too weak and indecisive they won't feel the necessary psychological stimulation to achieve the most powerful orgasms they are capable of having.

It depends on the personality of your woman and the specifics of your relationship as to how suitable this advice is going to be for you. If you're both more into the new-age/spiritual thing then the advice in this product will probably resonate with you better.

There is a bonus book included that has Tallulah's top recommendations for adult toys you might want to check out. It's a short book and has a brief description of the toy and then a link to Amazon if you want to purchase it or check out the customer ratings.

Blog posts and a members forum are also advertised as a bonus, but these are extremely disappointing. The blog posts are simply advertisements to get you to check out other products or services in the dating industry, and contain no useful content. The forum has a single post on technical support, which I couldn't access as I was prompted for a password that I didn't have. It appears there is no activity at all on the forum.

Rather than just teaching you a technique that you 'do' on your partner, it focuses more on exploring her body and communicating to find out what she responds best to sexually. Compared to other products that women might feel uncomfortable watching, this is probably most effective if you learn from it together.

Some of the advice is not the best, so just discard anything that doesn't fit your style. There's also some weird hippy-type stuff in some of the videos, so just do your best to ignore these elements and focus on the bigger picture if you can.

Tallulah Sulis offers men what they need to know about making a woman squirt in ecstasy in her Female Liquid Orgasm home study course and membership site.

- Take a woman's ejaculatory responses to a new level
- How ejaculation makes a woman love her body and builds confidence
- Confidently approaching and introducing idea of female ejaculation
- The correct and confident way to do a stroking session, including a couples stroking exercise
- Getting to the heart of her Yoni, finding her G-Spot and its 2 most highly sensitive parts

Lifetime membership $97 for first month, then $17 per month after that. Cancel anytime.