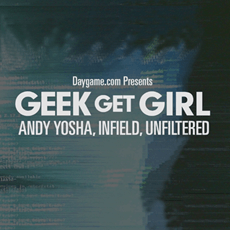 
See other courses and coaching
from DayGame.com.

This infield video program by Andy Moore is designed to teach men how to quickly accomplish Daygame. Presented as “the world’s most realistic and most outrageous Daygame education”, it aims to take a hardcore approach to Daygame.

It offers 57 videos of Andy approaching beautiful models and women over 7 days during fashion week in New York, and 2 days in Toronto. By analyzing the approaches and mistakes, the program is intended to provide a realistic, unadulterated view of Daygame.

Each video includes an infield analysis.

- Catching women as they finish work
- Approaching a beautiful, but unforgiving, blonde Australian woman
- Approaching a sexy Ukranian woman
- Getting my first number, and the mistakes of the approach
- A failed approach, even though the woman allows for chances to correct mistakes
- Another failed approach, even though the woman gives chances to move forward
- Approaching a gorgeous woman on the streets of Manhattan
- Approaching and kissing a gorgeous geeky woman after 10 minutes of talking
- Approaching an English woman (warming up)
- Approaching a model, getting her number, and the missing interaction elements
- Interaction with a sexy Argentinian lawyer
- Good interaction with a gorgeous entrepreneur, and getting her number
- Example of the kind of interaction that leads to a flake
- Example of being persistent and not giving up at the first hurdle
- Fun interaction with an Asian woman, with examples of challenging and teasing
- Approach with a fun pair of women
- Example of how you need equal or higher energy dealing with a woman in a group
- Solid interaction with some fun teasing and challenging
- Why you shouldn't always immediately give up when women say they have a boyfriend
- Getting a number, and an example of leading, dominance, and adding sexual tension
- Finding out about the boyfriend during the approach
- Solid interaction that leads to a mini instant date and a solid number
- Demonstration of persisting in a fun, playful, and non-needy way
- Taking responsibility for a rejection
- Example of what happens when you open low energy with no enthusiasm
- Example of persistence, standing up for ideas when challenged, and staying on track
- Example of frame control and persistence in the face of some objections

User Reviews of Geek Get Girl

"Better than DG Blueprint--Possibly The Most Instructive Vids Ever"

Overall rating
10.0
Effectiveness
10.0
Ease of Implementation
10.0
Innovativeness
10.0
Packaging/ Customer Service
10.0
Value for Money
10.0
Reviewed by Brainbuster
July 21, 2016
I could've sworn I wrote a review of this a year ago,
but maybe I just wrote it up in MS Word and forgot to post it.

Well, I don't know where that went, so this may be a bit less thorough
as it's not fresh in my mind...


Geek Get Girl beats Daygame Blueprint, Date against The Machine, and Effortless Infield.
In fact I'd almost go so far as to say that it beats Daygame Domination.

What makes this unique is that it shows you "failure" after "failure,"
"rejection" after "rejection." (the word "failure" is not an ideal term to use for rejection).
In this way, it is similar to its successor, Daygame Immersion (which is nearly 50 hours of footage of 8 or so greenhorns who spend a week with Yad coaching them--you can see them start trying to chat up women, and by the end of the week, on account of specific advices Yad gives to each of them, their improvements were amazing).

This format is not only more instructive, but more inspiring
than seeing 10 infields showcasing flawless game.

Maybe I'm different, but it's far more encouraging and more educational
watching Andy Yosha watch himself and critique himself, then get back into the flow of daygaming
and succeeding.

He begins the first day after several months of not daygaming. He had been focused on work.
So the first day, he sucked. You get to watch Yosha get blown out and humiliated again and again, which is a real treat.
By the THIRD DAY, he kisses a 17 year old beauty in the street, and that girl soon ended up being more than just a SDL. She became his girlfriend. They got along so well that this was one of Andy's fondest daygame memories (I think I recall he said something like that--maybe she was one of his favorite girlfriends).

It goes to show you that it doesn't matter whether you've been rejected for two days straight of full-time daygaming. That "third day" is just around the corner.
It also suggests that momentum, or "vibe," is very important.

I personally can vouch for that. Most of my daygame successes (maybe all?)
happened when I was exhausted at the end of hours of daygaming, when I was just about to go home.
Then BAM! I get one more out of the way--and she happens to be a red-head model who had spent a year in South Africa volunteering--an amazing girl who became my girlfriend.

Anyway, I LOVE Geek Get Girl.
I wish I had watched this before Daygame Blueprint. Maybe it's not even necessary to watch DG Blueprint (I personally think it's overrated).
Definitely get Geek Get Girl.