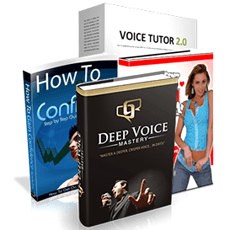 "Contains a few exercises that possibly may deepen your voice, but disappointing product overall"


Last Update: September 25, 2022
The Good
There are some different exercises prescribed and possibly they could help to deepen your voice.
The Bad
Not a lot of information overall and not much care has been put into the product. Would have been helpful to have video demonstrations of the exercises. The bonus products are terrible.
The Bottom Line
This is a pretty poorly put together product and there isn't a lot of substance to it. The only thing that really matters though is whether or not you'll see results from it. This is tough to say, as the author only uses himself as an example and there's no hard evidence given as to the results he achieved or whether it has worked for other people who tried it.

In theory it makes sense that it would work to some extent, but it may take longer than what the book suggests to see your desired results. It's really tough to evaluate the effectiveness of this product, as it'll take consistent effort over a period of time to see whether or not it works for you.

Rudy Haynes has put together Deep Voice Mastery based on what he claims he used to go from a high-pitched voice to a deep, masculine voice. He became determined to change his voice after the girl that he was interested in just assumed that he was gay, mainly because of his voice.

So he started trying different exercises and techniques in an effort to develop a deeper voice and increase his confidence. He started off with some neck exercises to try and strengthen the muscles in his neck, and claims that after a few days his neck looked noticeably thicker.

These same exercises are recommended here in the book. They're simple isometric exercises and I think it's highly unlikely that anyone is going to see noticeable growth from them in a matter of days. It's more likely that you'll need to do these exercises for weeks or months to get significant results.

Haynes claims that after a week he woke up one morning to a deep and masculine voice, but it only lasted for so long. So then he set about learning how to make sure he kept it permanently.

I have some skepticism about the speed with which he says he saw these results. It's also not clear to what degree his voice became deeper, as there is no audio or video of him to be found anywhere in this product. We're pretty much just left to take him at his word, as there's no evidence presented or case studies of how this has worked for other people.

Haynes details how everything he did was a totally natural way of deepening his voice, rather than relying on surgery or drugs. If you can get the results you're seeking naturally, that is clearly the better way to go.

He mentions Laryngeal Framework surgery, which he says costs $5000, as one option many people choose. But there are always risks involved with surgery and this seems like an extreme solution.

The other thing that's mentioned is Testosterone Buccal, which is something that medical practitioners may prescribe for you. There are all sorts of nasty side effects associated with this though, and the FDA is investigating the elevated levels of stroke, heart attacks and death in men taking FDA-approved testosterone products. For a much safer way to increase your testosterone levels, check out or review of Testshock.

So this product is focused on natural steps you can take instead. Some of them might seem quite obvious, like drinking plenty of water, whereas others are exercises that you likely haven't seen before.

There aren't a great number of exercises here, just a handful, and you'll need to do them consistently to increase your chances of seeing results. This product isn't a magic pill solution, so it's going to be up to you to get into the habit of setting aside a few minutes throughout the day to practice.

Things That Could Have Been Improved

It would have been great if there were videos included of the exercises to see them performed properly. One of the exercises involves hanging over the side of the bed and doing a certain neck movement for reps and sets. I thought I understood it, until it said to change sides when you're finished. From how I was picturing it, I have no idea how you could change sides. Video demonstration would have made things so much clearer.

There's really not much to the main book, and it feels like it was put together in one afternoon. It's only 36 pages long, and that's including pictures, really large typeface and some wide margins. There's a number of mistakes that haven't been corrected and overall it's just a pretty sloppy product.

So when you see how little content is included, it may feel like you aren't receiving much value. And possibly that's true. The only way to know for sure will be to do the exercises for a sustained period of time and note the results you're getting. The ideal way to do this would be to record your voice before you start and then once a week thereafter to see what progress you're making.

There's also voice tutor software advertised as a bonus. When I installed it, it said that it was designed to measure the pitch of singers and instruments. Not sure if it has any practical implications for deepening your voice, as the software didn't work. Taking a further look, it says it's designed for use on Windows '95 and '98, and when you see the installation process it's clearly some relic software. Even if you can get it to work, it's only for evaluation purposes and you're limited to ten uses of it. Pretty disappointing and a case of misleading marketing.

If you purchase this product you get access to a members area. Despite claims that it will be updated regularly, the last activity seems to be back in 2009. So there are links to some YouTube videos and other sites that no longer exist.

Some of the videos are still online and you'll be able to watch these. But there's nothing from Haynes himself, just random videos that you'd be able to find yourself if you searched for voice training on YouTube.

There's one or two things in here that you mind useful, but none of it is original and overall this members area does not provide much value.

There's some bonuses included, unfortunately they are all pretty much rubbish. Besides the voice tutor software which doesn't work, there's a few ebooks as well.

The best thing you could do with these is just delete them, as any useful information you might learn is not worth exposing yourself to the awful information that they also contain. They aren't written by Haynes, but by various other people who really have no idea what they're talking about. They look cheap and tacky and tell you to do things that are often more likely to hurt you than help.

One of the books on attracting women says that on the fourth date you need to make a move to let a woman know you're interested. Not a sexual move, but that you should be aiming to hold hands with her. And that you should ask her questions such as, 'Do you really like me?' to see where you stand with her. Use this advice at your own peril.

The book about online dating is clearly dated, as it says the best site to meet women is MySpace and that Facebook is an alternative for people who are still in school. The information here is horrible, don't waste your time with any of it.

There was a book on confidence, but the first 20 pages were about how to raise your kids so that they can grow up to be confident and self-assured. Really disappointing stuff.

This is a pretty poorly put together product and there isn't a lot of substance to it. The only thing that really matters though is whether or not you'll see results from it. This is tough to say, as the author only uses himself as an example and there's no hard evidence given as to the results he achieved or whether it has worked for other people who tried it.

In theory it makes sense that it would work to some extent, but it may take longer than what the book suggests to see your desired results. It's really tough to evaluate the effectiveness of this product, as it'll take consistent effort over a period of time to see whether or not it works for you.

Rudy Haynes teaches men how obtain the voice they have been dreaming of, without surgery or costly voice lessons. He offers exercises to create a strong, consistent, and reliable voice. The exercises take approximately 3 to 5 minutes each day.

He reveals tips and techniques for changing a weak high-pitched voice into one that is strong, deep, commands respect, and helps attract more women.

- Voice exercises to find the correct pitch
- Estimate voice abilities and create a deeper pitch
- Changing a low confidence level
- What successful and confident people are doing
- How to be irresistible to women
- Successful unwritten rules about dating
- Give yourself an extreme makeover without surgery
- Identify whether your flirting is working
- Deep voice information, articles, and training exercises
- A paint-by-the-number process to strengthen the larynx and voice box
- 7-step system to maintain a sexy and deep voice
- Wake up morning routines for the voice box, larynx, and strengthening tone
- Ways to make the vocal chords not work so hard
- Finding your timber and pitch on cue
- Success stories of weak voice sufferers and how they created a sexier, deeper voice
- Important voice-enhancing products
- Explanation of the stemocleidomastoid muscles, their power, and purpose
- How the neck affects the voice, and using it to improve the voice
- How to relax and de-stress the vocal chords
- 6 ways to build a trusting voice, with depth
- Practice posture building for better voice resonance
- Society's shaded view of “masculine” and overcome obstacles with the voice