Why Can't I Use A Smiley Face? Stories from One Month in America 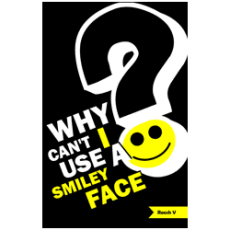 "Illustrative of 'No Game' / 'Bad Game' and a Pretty Depressing Read"

Last Update: May 16, 2022
The Good
Roosh's clear 'dissatisfaction' communicated throughout the book potentially provides some philosophical insight/ life lessons for those looking for it.
The Bad
Strewn with examples of what not to do and think. Examples of poor dialogues. Examples of losing self control and ineffective mindsets. De-motivating perspective.
The Bottom Line
Pass on this book - nothing worth learning here.

A very negative and depressing read which could be pretty de-motivational (not what you want).

Roosh demonstrates poor women skills throughout and when he gets no results he attributes all the blame to the women.

This is a narrative of Roosh V's trip back home to Washington D.C. in the U.S. for a month during 2012. Within it he relates adventures (and non-adventures) with girls while there, his perspective and thoughts on Washington and American female culture, and his feelings towards his family.

I picked up this book to review because Roosh has become very well known for traveling and dating foreign women in the countries he visits. He has a long list of books written about each country he visits, with his ideas and experiences about picking up women in that country. Check them all out here.

I also noticed a pile of positive reviews on his site and on Amazon for this book which while enthusiastic didn't offer any constructive feedback on what could be learned from it.

I'm personally interested in the subject since I've lived abroad and been a 'wanderer' since I started college and I saw similarities between Roosh's and my own journey into pickup artistry. I translated my natural interest in cultures, travel and languages into seeking out experiences with women from as many different cultures and countries as possible in my first 8 years or so of pickup.

So I figured we would have a lot in common… Roosh and I… But...

What Does this Have to Do with Learning Game?

Autobiographical narratives of men who have a lot of experience with women are useful for three reasons: Some of the narrative books we have reviewed in the past deliver on either one or both of those two factors. Neil Strauss' The Game, Erik von Sydow's Metawhore and Jeff Allen's "Get Laid or Die Trying" are all good valuable reads from which you can learn useful things and be inspired.

This is not the case for "Why Can't I Use a Smiley Face?". In fact, I'm concerned that if someone who has not yet experienced success with women reads this, they could acquire some pretty bad perspectives and ideas about how to approach, attract and relate to women effectively. This could seriously damage their progress and sabotage their long term satisfaction.

All I'm concerned about in this review is whether this book is a useful tool to learning better game and improving your results with women. I'll leave all the 'manosphere' related topics aside (the movement Roosh is connected with) which is more to do with a particular perspective on modern western society.

Illustrative of "No Game"/ "Bad Game"

Roosh relates a number of outings to bars and clubs and his efforts to meet women (in pickup community speak "Field Reports"). To his credit, the narration comes across as completely authentic. There is no sign of the typical exaggeration or hype that you find in the majority of these types of "Field Reports" written up in Internet forums. Instead he relates it at face value - which allows us to get a clear picture of "his reality".

We see Roosh approach and for the most part get rejected pretty quickly by a variety of girls. The reason for this is a combination of "neediness", negative emotions, lack of self control and social skills. Qualities which are all fairly effective at repelling women.

Roosh perceives that having lived in a girl's country gives him an advantage and he clings to this advantage. He even says at one point when looking for a foreign girl to approach: "I got excited at the possibility that I might have lived in their country." He's excited because he thinks it's going to be easier, and he doesn't seem to have had much experience with foreign women living in the U.S. or any other country than their own for that matter because he does exactly what every other guy she'll meet in the country does.

To start conversations, Roosh uses variations of the line "You aren't from here are you, where are you from?". Other variations include:

In my experience this is one of the biggest turn offs for foreign women from the start. You are basically saying I'm approaching you because I think you are from X country. This typically gets you shot down within a few seconds because the girls:

A) are fed up of hearing it (it's a default line many men cling to who are interested in foreign women)
B) think you're only interested in them because of where they are from - and that is creepy.

Depending on the country and how many men tend to be interested in girls from that country, getting shot down is more or less severe. Do that with a Japanese or Thai girl for instance, who get more attention than most, and kaboom. You're designated "yellow fever creep" as she turns away.

Throughout the book, with virtually every girl he comes into contact with he ends up pushing some negativity her way. This includes the girl he sleeps with. From snarling at them, telling them he's going to beat them up, to outbursts of uncontrolled rage or just plain brutish arrogance Roosh demonstrates a complete lack of self control and social skills.

The book is littered with pretty clear examples of why Roosh isn't getting very far with women during his American vacation. However, these are all re-interpreted in Roosh's thought stream as the "women having issues" rather than looking at himself and saying "I'm not behaving in an attractive manner or able to connect with this girl.".

The signs are obvious for anyone who has some experience - so the question is why doesn't Roosh see it? I know he's been into the Game for at least 7 years because I remember him posting in the old private Mystery's Lounge forum around 2006. Is he choosing to not see the obvious signs? Or does he simply think everything is someone else's fault? In this case the women he is chasing.

The clearest example of this is with the one girl he sleeps with and for which he documents the full details from start to finish. Everything goes downhill after having sex with her starting with her saying "You don't have to stay."

Wow. In my 12 years of game I've never heard anything like it. Not from anyone I know who has reasonable game. Basically the girl is telling him that she'd like him to leave, immediately after sex, while trying to still be 'nice' about it.

Probable cause for a reaction like this? "Bad sex".

Roosh makes no mention of whether the girl was able to reach orgasm or not, as he seems solely focused on his own ability to have one.

He manages to not leave and engages her with sex later on in the night although, this time, he's very aware she's not into it.

This episode hammers its point home with him deciding to leave a message for her with a "smiley" and his email address to stay in contact. She doesn't email him of course - that was decided at the point of 'bad sex'. So the book's title ends up being a good illustration of how Roosh twists his perception of reality so that he doesn't have to acknowledge his shortcomings. The book is titled "Why Can't I Use a Smiley Face" because of the smiley he leaves this girl with which gets no response. In Roosh's reality smileys make up for bad sex or it's more important to not send a smiley to a girl than give her good sex.

Reality is the opposite. The quality of the sex is going to be by far the largest factor motivating a girl to stay in contact with you - or not.

This lack of "responsibility taking" shows through with his actions too. Since he is unable to orgasm during the first round of sex, he persuades the girl to let him go raw without a condom. In doing so, he trades a possible STD exposure for his prize of five seconds of enjoyment without a second thought. It just leaves me shaking my head. Please don't try this at home. Stay safe.

For most of the book, it's not the smiley that gets the blame, but the girls in Washington D.C. being embedded within the terrible American male-female culture. But this observation isn't limited to the American women. He spends most of his time actively trying to identify foreign women, and when they respond with rejection he puts this down to them having being "corrupted" by the same American culture.

Is Washington all that bad? I've never been, but I imagine that it isn't too different from parts of L.A., New York, Toronto or London. Each different. Each with many men, including myself, getting great results and finding great and interesting women there.

Could Reading this Benefit Anyone?

For me reading this book wasn't a total waste of time. It helped to clarify how dissatisfied you can really get from chasing the wrong goals and not questioning yourself about what you are doing when you feel dissatisfied. It's pretty clear that Roosh is not very happy from his narration.

Now.. interestingly, Roosh does say this at the end of the book:

"Sometimes it feels like I'm running on a treadmill, chasing something with all these experiences, but it's all shades of the same thing…. I'm getting tired."

On some level he does realize he needs to reassess what he's doing. I hope he pursues that thought further, takes on new goals, and finds more satisfaction.. then, if he writes a book about it, I'll definitely be reading it in the hope that it relates how to recognize and break out of the *Dead Zone* that Roosh (and many other men that have followed the "pickup artist path") find themselves in. That would be a really useful book - a solution for a common problem found with men who study dating advice.

This book fails to provide much in the way of learning or value. It's not motivational - more like de-motivational with its negative and rather morbid tone. From a philosophy and experiential perspective it may give you ideas on what paths and ideologies you should avoid as it's clear that Roosh is really not happy. If your quest to get better with women isn't going to make you happier, what's the point?

Pass on this book and read some of the insightful mini-biographies instead. Good ones are Neil Strauss' The Game, Erik von Sydow's Metawhore and Jeff Allen's "Get Laid or Die Trying".

Comments (1)
Help other users find the most helpful reviews
Was this review helpful to you?
Facebook
Twitter

Why Can't I Use A Smiley Face is a book for guys who are interested in the comparison of meeting women in the U.S. vs. other countries. The story you follow is that of Roosh while he tries to meet and lay girls in his home town of Washington D.C. after coming back from years of travel and meeting women in foreign countries.

(depending on product format or options purchased)

User Reviews of Why Can't I Use A Smiley Face? Stories from One Month in America