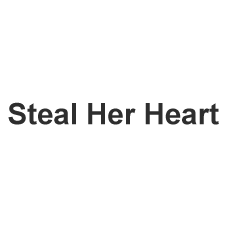 "Solid Overview On Becoming An Attractive Man; Doesn't Really Bring Anything New To The Table"


Last Update: May 28, 2020
The Good
Largely focuses on improving yourself and becoming a better man, which is going to pay off long term. Teaches how to communicate with women in an honest and authentic way, and not to waste your time with women who won't be a good match for you.
The Bad
Very little here in the way of originality. The expectations you have about this program may be unrealistic based on what is promised in the marketing. Doesn't give you much of a step-by-step guide on what to do.
The Bottom Line
Steal Her Heart gives a solid overview of many of the ideas and techniques from the dating and seduction community. If you've been through other dating programs it's unlikely you'll find much here that you haven't already heard before.

There aren't any quick fixes here and the advice is you'll need to put a bit of work in to develop yourself as a man. This is a product best suited to beginners, and if you fall into that category some programs we rate highly are Conversation Escalation: Make Small Talk Sexy and Make Women Want You.

Steal Her Heart is the first dating program released by Justice Donnelly, a dating coach who is new on the scene but has been actively improving his life with women since 2008. The format of the program is a series of eight modules which are presented as text-based video slides.

The theme throughout is all about turning on your 'searchlight' so that women are automatically attracted to you. In essence, this is just about working on yourself and developing your life so you become a more attractive man overall who women will want to be with.

This is definitely worth doing, as to have lasting success with quality women requires you to constantly improve yourself. The flipside of this is if you're looking for a program that is more focused on tactics and techniques, you're not really going to find it here. If that's what you're after, a good option is Real World Seduction 2.0 by Swinggcat.

So how do you work on becoming a more attractive man? One of the ways Donnelly suggests you do so is through the use of what he calls 'your five heroes'.

There's more info on exactly what this is inside the program, but it basically involves how to use examples of attractive men to improve areas such as body language, fashion sense, and how you talk to women.

This is something that gets referred to throughout the program, and it's something that you'd continuously work on. The end result is you'll be moving in the direction of becoming the type of man you aspire to be, rather than striving to be someone else's ideal of what an attractive man is.

So this is good, as it gives you room to explore your individuality and not just conform to something that may not suit your particular style and personality.

Other Programs You're Suggested To Check Out

There's a fair bit of promotion for other programs by Donnelly throughout Steal Her Heart. These are programs he says he's used himself and encourages you to buy them if you want the best results.

The main two that are referenced a lot are Adonis Golden Ratio and any of the programs by David Shade, who Donnelly has been a student of since 2008.

The Adonis program is all about giving you the ideal body that women find attractive, and Shade's work is all about becoming a highly skilled lover. So there is a focus here on becoming more physically attractive and improving your physique so women are more interested in you initially.

These things are worth working on, but also reflect one of the downsides of Steal Her Heart. It tells you the obvious i.e. women will be more attracted to you if you get in shape, and then spends time trying to sell you on another program.

It's fine to suggest other resources that may help, but it got a bit repetitive and felt more like some of the content here was an advertisement rather than actionable advice you can do something with.

Is The Advice In Steal Her Heart Any Good?

For the most part, the advice in this program is fairly good. It's more or less broken down into the areas of approaching women, attraction, rapport, and seduction. If you're familiar with the dating and seduction community you'll recognize that this is a pretty common format and not anything new.

There's also some advice on fashion, texting, getting physical and handling tests from women. If you haven't studied any dating advice before then most of what's on offer here will be beneficial for you and probably show you a lot of the mistakes you've been making.

Another thing that's covered here is how to select which women will be good for you and which ones you'll want to avoid. This is pretty good info as well, and especially if you're less experienced it can help you save your time and avoid unwanted drama down the track.

I can't say that I agreed with everything suggested here. One bit of advice that is repeated a number of times is to stay away from women with weak handshakes, as it's likely they'll be bad in bed and cheat on you, among other things. There's no real evidence that this is the case and it seems an exercise in making rash generalizations without any basis of fact. There are more reliable ways to determine what a woman may be like than simply judging her on her handshake.

In the section on texting, something that was mentioned was you'll need to send a dick pic at some point but you want to avoid it in the first few messages. There's really no reason why you'd ever need to send one, so it struck me as strange why this was said. Avoid sending any altogether and you can't really go wrong.

One of the things that helps determine how satisfied you'll be with a program is how well it meets the expectations it creates for you. In this case, it sets some pretty high expectations with how quickly you'll get results and how easy it will be to achieve them.

The story in the marketing video is that Donnelly learned all his secrets from his dying father's journal, who was apparently a super-stud with women. By reading the journal Donnelly then got women throwing themselves at him everywhere he went.

The reality is, it's not going to work out for you quite like this. The information here is nothing that hasn't been said 100 times before, and you're going to have to put in a fair amount of work to improve yourself as a man.

You're told that you won't need to approach women, however in the program it's pretty clear that you are going to have to do so. So if you're intending to buy this on the promise that you'll never have to take the initiative and make the first move, you're in for a disappointment.

There's some decent enough info here in Steal Her Heart, and if you take the time to implement it properly you'll become a more attractive man and boost your results with women. But if you're buying this course looking for a magic pill that'll solve all your problems overnight you'll come away pretty unhappy with it.

One of the bonuses included is called Searchlight Texts/Where's My Sex App. It's basically how to use texting to get more sexual with a woman. Some of the advice is good, some of it not so much. It could be easy for guys to take things to far and do more damage than good with being overly sexual and following some of this advice. Again, the issue of sending dick pics is brought up as something you should do. Sure, it's something you can get away with, but there'll be more guys running into problems and getting bad reactions by doing this than there are guys getting great results. For a number of reasons, I'd suggest not doing this.

Another bonus is Searchlight Tractor Beam, which is a technique for getting really fast sex. It's completely ripped off from something taught by Brad P., his ten-minute seduction technique as explained by one of his friends he interviewed. The technique taught here by Donnelly is literally the same exact thing, so it's not original at all. The technique, no matter who teaches it, is kind of creepy to be honest and not something I would ever do or recommend to anybody. Use it at your own risk.

There's also a 30-minute video called Searchlight Online. This is all about how to optimize your Facebook profile and social media accounts so that you attract the most amount of women. It also covers how to handle online dating sites and apps like Tinder so that you get the best responses from women. There's some decent advice here and this bonus was overall better quality than the previous two.

Steal Her Heart gives a solid overview of many of the ideas and techniques from the dating and seduction community. If you've been through other dating programs it's unlikely you'll find much here that you haven't already heard before.

There aren't any quick fixes here and the advice is you'll need to put a bit of work in to develop yourself as a man. This is a product best suited to beginners, and if you fall into that category some programs we rate highly are Conversation Escalation: Make Small Talk Sexy and Make Women Want You.

This program shows you how to flip on your “Searchlight” in order to arouse women and get them to approach and seduce you. It is intended to provide a natural and effortless way to get laid on command. It includes phrases to get you started and that trigger immediate arousal.

User Reviews of Steal Her Heart