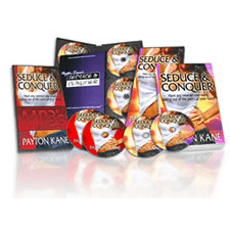 "Seduce & Conquer 3.0" is an audio program designed to teach you how to give yourself a 'player makeover,' approach and talk to women, and how to pick up strippers.

- How to deal with rejection
- What qualities attracts stripper
- How to become her boyfriend
- How to make women lust for you
- How to groom and style your hair
- The best brand of jeans and shirts
- How to seduce and pick up strippers
- What type of guys strippers want
- How to effectively use eye contact
- How to get her to give you free dances
- Learn how to become attractive to women
- How to captivate a woman's mind and soul
- How to close her and get her phone number
- What to say to strippers when they approach you
- How to use her emotions and looks against her
- How to establish that you are not her customer
- How to show her that you are not like other guys
- How to use eye contact to get strippers to want you
- How to portray that you are an alpha dominant male
- How to plant a seed with every stripper you speak to
- How to dress for every occasion and have presence
- What type of watches and accessories attract women
- How to make her believe she has chemistry with you
- How to buy clothes and what type of shoes to purchase
- How to talk to women and use the tone of your voice
- How to see her intentions and read her body language
- How to understand strippers and what they are thinking
- How to use your personality to leave a lasting impression
- Qualities women look for when getting approached by men
- How to create a connection with a woman and close the deal
- How to get all the women at the club to like and respect you
- How to use the tone of your voice to get what you want from her
- How to use the one you are speaking to to attract other women
- How to act around her without letting her know your intentions
- How to use the woman you are speaking too to attract other strippers
- The differences between picking up strippers during the day and night
- How to tap into her inner most thoughts, dreams, wants, and desires
- How to make yourself look like "the man" and better than the other guys
- What to say to women, how to say it, and how to close her every time
- How to get the instant upper hand and get her to respect and desire you
- The fundamentals of approaching women and the environments to approach them

User Reviews of Seduce and Conquer 3.0

Overall rating
1.0
Effectiveness
1.0
Ease of Implementation
1.0
Innovativeness
1.0
Packaging/ Customer Service
1.0
Value for Money
1.0
Reviewed by Brainbuster
May 14, 2013
If I had spent only $10, I would still feel very angry that anyone could call this a product and sell it.

I've listened to dozens if not hundreds of this kind of material.
I think I've only written 2 or 3 other reviews. This was so bad it inspired me to write a review so you can save your money.

The best part of the program is the image consulting part...all the other tracks Payton seems to just be bullshitting everything, sometimes contradicting himself. Even the image consulting track is mostly an advertisement for a "full-blown" makeover with him. They kept repeating that this isn't meant to be thorough or detailed, just basic. If you want the real deal, you'll need to get the $700 Payton Kane makeover. So I kind of felt that I just paid $50 for a teaser. He also seems to bullshit quite a bit in this track. For example, he insists that you get your teeth professionally whitened by a Dentist, instead of using Crest Whitestrips, because you can't trust those whitestrips! Well, I've whitened my own teeth with generic whitestrips, and everyone compliments me on my smile. It's just hydrogen peroxide. My dentist told me once that using strips won't harm my teeth, and I'll be just fine. You don't need a doctor to put hydrogen peroxide on your teeth, and that's what whitens teeth. So Payton sounds at times like an old man who doesn't know much but feels confident about his opinions.
Honestly though there was some good advice in the image track...but it was the sort of thing you would expect for free, like wear black socks and not white socks; don't tuck in button-up shirts, get a tan, make sure your belt matches your shoes, wear brown shoes with jeans, not black, etc. There, I just saved you $50.

This entire program showcases the worst interviewer in the world
interviewing Payton Kane.

This might've been a quality program if the interviewer didn't sound like a 12 year, Serbian Kermit the Frog. I'm sorry to say this, but the interviewer needs a voice coach, not a dating coach. It's a glaring defect in his presentation, and all the game in the world won't overcome a glaring defect (IMHO). The interviewer was apparently a student from Kane's class (who, incidentally, never paid attention in class...in fact at one point Kane yells at him for asking "stupid questions" over and over again, and chastises him for not listening to S&C 1 before the interview).
In short, the interviewer ruined this for 3 reasons. One, he had as much game as a 7 year old boy, so he didn't have any good questions. Two, he interrupted Payton at every turn. Three, he failed to listen to Payton's answers and asked the same stupid questions over and over again. And four, his comments revealed how little he understood Payton's answers. He repeated Payton's answers incorrectly.

I loved Seduce & Conquer 1. Payton Kane was on fire ON HIS OWN.
Seduce & Conquer 3.0 features an interviewer who interrupts Kane in the middle of every sentence with something profound like, "Oh, right, exactly, yeah," or "So, like don't be too mean though," or "so what should we wear in the winter though?" (I think he asked that one several times when Payton was talking about summer outfits, spring outfits, and autumn outfits). The interviewer just kept on asking about winter.

Very, very frequently both the Serbian (who I'd bet my last dime is a virgin) and Payton plug Payton's website and his other products. At one point Payton said, "You got laid last night didn't you?" Then there was a long pause, and the Serbian said hesitantly, "...exactly." It was so obvious he couldn't tell Payton the truth.

The young boy didn't ask ONE quality question. Most of his questions were read verbatim from the advertisement of S&C 3.0.
For example, "How to make her respect and desire you?" and
"How to plant a seed with every stripper you speak to?"
I'm not joking. He asked the questions IN ORDER...straight from the ad copy.

I was really excited about this product because of S&C 1.0, but was disappointed.

Also, as is his habit, Payton Kane tells several stories about how women dote all over him, many times reaching down his shirt to feel his nipples without any words spoken (he couldn't count how many times that has happened to him), and that sort of thing. We see nothing like this in the in-field demo tape.
At the same time, we don't hear Payton Kane using ANY of the material he teaches.

To top this product off, the last track is an hour of IN FIELD with Payton Kane and the interviewer! Finally! I was looking forward to this.
Have you ever seen or heard a demonstration of pickup, in field? Well, this should be on youtube titled

The ENTIRE HOUR PICKUP ATTEMPT IS SPENT CHATTING UP A GIRL WHO HAD SAID SHE HAD A BOYFRIEND IN THE FIRST 2 MINUTES. She also brought up her boyfriend twice more, throughout Payton's pickup attempt.
After she told him that she had a boyfriend the first time, I was still looking forward to hearing Payton Kane in action. I was so disappointed.

A frustrated, agreeable chump started talking in Payton Kane's voice to the woman. He tossed out one or two cocky jokes during that hour. Most of the hour Payton seemed to be (in my opinion) seeking approval, and trying to ingratiate himself to her by telling her how unfair it was how so and so treated her, etc. This is how one supportive woman talks to another woman.
How friends talk.
That's what women do...not Payton Kane!

The in-field session ended when Payton and his Serbian slowly trailed off, murmured to themselves, and clearly ran out of things to say. Then the woman said she was going to go eat and said good-bye.

I suppose in S&C 4.0 Payton will reference that woman as "that super-hot girl with a boyfriend who still couldn't keep her hands off me."


Comments (0)
Help other users find the most helpful reviews
Was this review helpful to you?