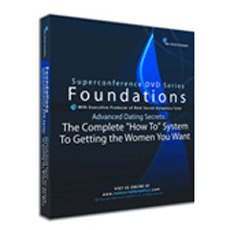 "I Would Definitely Include Top 10 PUA Products"

Overall rating
7.9
Effectiveness
8.0
Ease of Implementation
7.0
Innovativeness
8.0
Packaging/ Customer Service
8.0
Value for Money
9.0
Reviewed by Goldennose88
January 10, 2007
The DVDs are very good and probably worth the high price, though, in my opinion, not as good as Mystery's. Probably, one should see both products because they are complementary and focus on different levels. While it is actually Mystery who laid the foundations of modern pick-up, Tyler gives helpful additional information, which can be included in the Mystery Method.
General:
The DVDs are well done and high quality. Tyler is very good and clear in presenting his ideas- in contrast to his writing which is ok, but not great- he needs massive space to lay out ideas and most of his stuff could be written more to the point (e.g., even the presentation for the DVDs on his website is pages too long!). He has become a little bigger since his earlier days and does not seem to be so exaggeratedly hyped anymore. Generally, he seems to be trustworthy and very rarely bragging (also contrary to his earlier writing) although for many of his statements I would love to see live-proof, if these techniques really work in the field (unfortunately, his bootcamps are too expensive for my taste- especially taking into account the very varying reviews about their quality).
What is a little bit annoying is that Tyler often engages in cross-selling. He hints that he has much deeper knowledge than presented on the DVDs probably as an incentive to take his bootcamps. For that price of the DVDs, I would have expected a full disclosure.
Content:
Tyler has developed some new concepts that are very helpful while many other things on the DVDs can be found in other writings which in my opinion is ok because it makes sense to teach also other gurus wisdoms. Some of his helpful concepts include:
-Secret society and double standards;
-Buying temperature;
-Dealing with amogs (Tyler always was leading in this area);
-Elastic snap band effect;
-Being non-reactive.

Tyler gives lots of techniques and practical tips for a complete pick-up though, in my opinion, there could have been even more techniques. Often, he is a little bit vague, giving the 20.000 feet overview without any practical ideas how to apply these techniques. Again, his content could be more dense.

Still, in the modern pick-up world where mediocre products abound, these DVDs are a highlight. I would definitely include them in the top 10 pua products that are on the market (not that I know them all, though)
Help other users find the most helpful reviews
Was this review helpful to you?