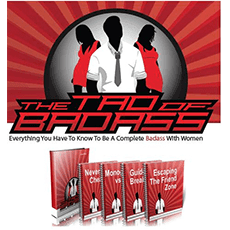 "The big picture of pretty much talking to women"

Overall rating
8.4
Effectiveness
9.0
Ease of Implementation
6.0
Innovativeness
10.0
Value for Money
10.0
Reviewed by tbbm
May 27, 2015
This is pretty much the big picture when it comes to talking with women. The map of interaction is phenomenal. This system can be used outside of dating which adds so much more value. The system in this book gives you an overview of what YOU NEED AND SHOULD SAY based upon certain moments of an interaction. It displays concepts that is very extraordinary such as Body language and Gender Roles and how they have a HUGE FACTOR when it comes to talking with women and with people in general.


The problem with the product is that it is an OVERVIEW of talking to women. A lot of guys are looking for verbal content which this product lacks.The funny thing is that some of the ads of the Tao of badass claim that it doesn't matter what you say but we kind of need some examples of what to say especially for a beginner. I think other reviewers will say it lacks applicability which is somewhat true.The lack of a verbal portion is the reason why i rated "Ease of implemenation" a 6. I highly recommend you look at Jason capital's Make Women Want You e-book as that gives you the verbal content that goes fantastic with this book. I also recommended (DayGame) by Yad and Andy. That video series gives you examples what the map of interaction should look like (However they have their own idea of map of interaction which is an interesting concept to consider theirs as well.) If you are anything like me, you'd want examples of how interactions should play out which is why the "daygame" product is recommended as it gives you infield footage of them using the map of interaction (The one thing to consider is the context when you are looking at Daygame. Don't base all your knowledge on that as that is the cold approach side of meeting women)

It is a great book for people who are first starting out with studying dating.Joshua Pellicer is the guy that changed my life. He now is retired from the dating industry unfortunately however i respect the guy for his reasons. He stated that he found his soul mate before the formation of the Tao of badass and wants to move on with teaching something related to spirituality.
Help other users find the most helpful reviews
Was this review helpful to you?