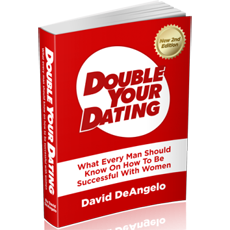 "I Owe my Progress to David D's Books"

Overall rating
10.0
Effectiveness
10.0
Ease of Implementation
10.0
Innovativeness
10.0
Packaging/ Customer Service
10.0
Value for Money
10.0
Reviewed by Artist818
November 23, 2008
David D's Double Your Dating and the other books that come with it have really helped me.

I had been out of the workforce for a couple of years due to a serious accident right before my graduation. The accident also cost me my childhood dream career and forcing me back to school again on a part-time basis. I became very self concious about my situation and stopped trying to date.

Then, last year, as I was making some physical progress, came to accept the situation with my injuries and was able to work part-time, I decided to pick up David D's Double your Dating (I had just seen the Pick Up artist, but couldn't afford Magic Bullet) only to have my father die which set me back on some of the inner game advances that I had made.

About the time my father died, I read David D's book, but I thought he was full of bull about not needing money. Then, I saw first hand someone without a job get and keep a hot looking woman without needing to take her out on expensive dates, etc. And, I started to believe.

A short time later, I started applying the C&F stuff on one of the female students for practice. She is lots of fun. Nice personality. Nice face. The body not so much, imo (however, she dates musicians and lawyers so go figure). She started coming around a lot and getting very flirtacious and touchey.

I took time to work on myself and my situation.

With school starting back up, I started applying the C&F with some of the women at both of my jobs.

Over the past few weeks, I have had:
- an attractive 20 year old student invite me to a party and, most recently, promising me a plate of Tamales after I started teasing her. She's a little young for me, but the practice is good.

- a 26 year old hot African American co-worker, who eats the C&F and can't keep her hands off me. She walked behind me the other day while I was talking to a supervisor and dragged her finger lightly along my shoulders, she always tells me I am so nice until I bust on her at which point she'll tell me I am either mean or a hellion and hits me playfully (well, she catches herself and stops before making contact).

Today, we went to lunch. I let her pay for herself (which would not have happened before reading David D's book and these boards) . She lost track of time and I realized she was going to be late getting back to work.

As we walked out, I did a little compliance test. When she asked, what I was doing, I told her it was a "trust test" and explained how she was letting my hand lead hers, because she trusted me. She liked it and was impressed.

Then, I said goodybe and turned away to leave. She grabbed me and pulled me back into a tight embrace.

She confessed that she can't wait until Monday to see me at work.

- the first student (the one that was getting flirtacious and touchey), whom I had not seen in 3 months, returned on Thursday to tell me her divorce was going through and hinting that she wants to go out.

- As I left the soon to be divorcee in the lab, I met a hot fillipino lady. I held the door open and I made comment when she thanked me (I don't recall what it was). She turned, stopped, and doubled back to talk to me. She gave me her name and told me the deptartment where I can find her on Tuesday. I should have done the email routine to get her number, but I was in a hurry and know where to find her.

Admittedly, I still have a long way to go. However I am already farther that I was this time a year ago. And, I owe my progress to David D's books and, to a lesser extent, both the Pick Up Artist and the Magic Bullet previews for changing my outlook.
Help other users find the most helpful reviews
Was this review helpful to you?