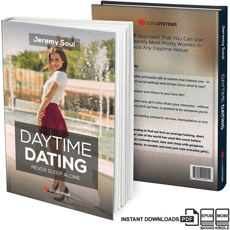 Overall rating
9.4
Effectiveness
10.0
Ease of Implementation
9.0
Innovativeness
9.0
Reviewed by The Supreme Artist
September 29, 2013
First of all, Jeremy Soul is a genius... His proposal is Direct Game in the daytime... But he is a member of Love Systems, which the main stuff - The Magic Bullets - advocates a structured indirect game (very similar to Mystery Method). How could he make it compatible with the Emotional Progression Model created by Savoy???

Apparently it would be impossible, but he did....
He took his game, which in my opinion would be more a Direct Natural Game (reminds me a lot of 60 Years of Challenge's system) and turned it into an structured game, according the LS Emotional Progression Model

About the book, the main points in my opinion that makes this an incredible reading are:

- He brings concepts about what differentiates day game from night game - some of the attraction switches are stronger in day game (what Jeremy calls "to show passion"), while others must be used more in night game (such as "being a challenge to women")
- He gives detailed hints about the places where you can play in the daytime and it's particularities...
- He gives powerful mindsets to improve your inner game in the day game
- He innovates the concept about opening walking sets, based on his own experience
- He defends extensively the Direct Openers over the indirect ones in daytime, and he makes his point very solid.
- Best of all, his "method" effectively works infield
Help other users find the most helpful reviews
Was this review helpful to you?