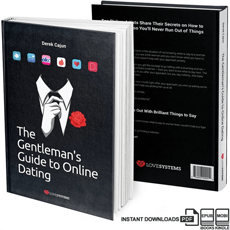 Overall rating
5.4
Effectiveness
6.0
Ease of Implementation
5.0
Innovativeness
2.0
Packaging/ Customer Service
5.0
Value for Money
8.0
Reviewed by Thanateros
June 28, 2013
"Worth checking out?" Absolutely, I found myself highlighting a lot of of stuff for later use, that's always a good sign. But "excellent," absolutely not. I don't understand how the reviewers on this site are gonna say the Mystery Method is "good" and this book is "excellent." To me, excellent means the book was a life changing read. The Mystery Method changed my life -- flat out. This book however, did not.

In all fairness, I will say that there are some things I will be doing differently with online dating after reading this book. The breakdown of how to approach photos, while common sense, were something I hadn't been doing at all. I followed his advice and literally received compliments instantly from women. Most of the things he mentions here are pretty common sense and really there's nothing innovative or grounding breaking about this book. It is however always good to see things articulated in writing that you had long suspected or worried about. For example having women in your photos but not overly sexual! Just implied.

I think his chat dialogues were kind of boring. There's nothing in there that I highlighted or would use in field. Surprisingly, the one chapter I would really, really use was the one on the Question Game. He may be right that this game existed even when he was just a kid but its use in pick up was invented by Mystery, especially the way you start off with the first question. I will say that Cajun refines this gambit and elaborates on it much, much further. In my opinion it's OK to build on someone's else's system as long as your punshing the medium further, which what he's done with this section.

I think he's really full of himself with his examples in the about me section. He ends with "good stuff huh?" If you have to say good stuff, it's probably not. I think it's OK stuff. I've seen "about me" sections written by girls on OKC that made me laugh harder to be honest. His examples are not the best I've ever seen, but I will say that seeing them has made me more confident about my own choices.

All things considered, he has some solid advice for being more strategic with how you approach every aspect of online dating. On the other hand it's not really that ground breaking. Helpful yes. Worth reading? Absolutely. Life changing? Not so much. (Except for the Question Game part!) ;)
Help other users find the most helpful reviews
Was this review helpful to you?