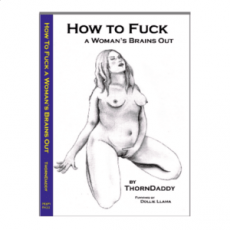 Overall rating
1.2
Effectiveness
1.0
Ease of Implementation
1.0
Innovativeness
2.0
Packaging/ Customer Service
1.0
Value for Money
1.0
Reviewed by Avidreader
November 27, 2012
This book is so awful that it actually could not only add nothing to your sex life, but give you stupid limiting beliefs, dumb hygiene ideas, waste your time, and, if you take it seriously enough, make you horrible with women.

The hilarious part is how much thorndaddy exaggerates and goes on about how great of a sex life he is, how great of a writer he is and how other books suck, and blah blah blah. It means nothing to be a good writer if all you do is constantly repeat your original 3 pages.

He also constantly shits on all other sex books that he apparently read, it's fucking hilarious because I have yet to read ONE book that was worse than thorndaddys.

Furthermore he has the dumbest ideas about so called "sluts". "Sluts" is the blanket term used to describe attractive women, because according to thorndaddy, desirable women are fat, ugly, and old (I'm not joking he actually has a chapter dedicated to making your woman fat).

He also goes on about his stupid self help ideas and how this book isn't just for sex (which it's terrible for) but it's also for making you a MAN (which it's even worse for).

And for some seriously dumb shit filling the pages, let's add to these retarded self help ideas with some great hygene tips. Some of these gems include not wearing deodorant, showering 5 times a week, and not cleaning your sheets, because women love the natural smell of a man...hahahahaha.

This book is more of a joke than anything, if you want a 250 page joke, then go ahead and read it, don't say I didn't warn you, thorndaddy is a fucking idiot, the extent of which may blow your mind.