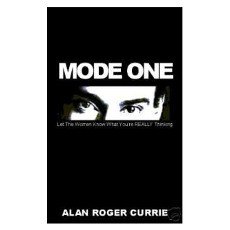 Overall rating
7.0
Effectiveness
6.0
Ease of Implementation
5.0
Innovativeness
9.0
Packaging/ Customer Service
6.0
Value for Money
10.0
Reviewed by Jackson Hunter
April 18, 2012
The Good
Fantastic information on how and why men communicate with women in the way they do, including the pitfalls of such ways. If you follow the ideas in this book, you'll never have to worry about not knowing where you stand with a woman ever again. Encourages you to behave in a way that is honest and open, and explains why this is secretly how many women want men to commuincate with them.
The Bad
The book is much longer than it needs to be as a lot of the ideas are touched on several times. There aren't any practical examples presented here. This approach isn't useful for all situations, and you'll have to decide for yourself when you need to be more subtle and indirect.
The Bottom Line
Mode One is an interesting book that every man should read at least once. It's really more focused on your mindset for interacting with women and the world as a whole. It's aim is for you to base your self-esteem on who you are as a man and then communicate what you want authentically. If you read this book you will understand how to eliminate any chance of manipulation by women. As Currie notes, you only have control over how you behave towards women, and how you allow them to behave towards you.

Mode One has become somewhat of a cult classic in the dating advice industry. While it hasn't benefited from the mass marketing of other products, it's become well known through word of mouth and its arguably controversial philosophy.

So what is it, and is it any good?

Alan Roger Currie writes that men tend to communicate in four different modes with women. Mode One is the method of communication he believes will lead to men having the most amount of success with women with the least amount of trouble.

Mode One involves being completely honest and upfront with women about your intentions. So if you are only interested in having casual sex with them, you should let them know. If you are interested in dating them or pursuing a relationship, you should tell them.

Basically, don't hide your desires and pretend you just want to be friends with them if that's not really what you want.

Mode Two behavior relates to presenting yourself as a nice guy to women before you actually reveal your intentions to them. So you might go out on a few dates with them and once you think she likes you, then you tell her what you're really interested in. So it's an overly cautious and lengthy plan of attack.

Mode Three is for the guys who never approach women or reveal their romantic or sexual intentions. Often these guys will use their material possessions or other status symbols to buy a woman's attention, with this working to lure in women who are looking to take advantage of such a man.

Mode Four occurs when a man becomes angry, frustrated and bitter about his lack of success with women and so seeks to gain revenge on a particular woman or women in general. He communicates his desires after already having blown his chances and seeks to hurt women through making them feel bad. Currie claims the most extreme cases can lead to guys becoming rapists and serial killers.

He goes into more detail of the four different modes in the book, but that is it in a nutshell.

According to Currie, most guys operate within Mode Two and Mode Three when interacting with women. I would have to say that I agree with this.

The reason that men are communicating in Mode Two or Three fashion is due to fear. Currie goes into detail about various fears such as rejection, being ignored, being perceived a certain way and others that stop men from being honest about what they want.

Can You Really Be Completely Honest With Women?

It's important to state that if you are upfront about what you want from a woman then there is always the chance of rejection. In fact, Currie says that if you use Mode One you will actually get rejected more than before.

But this is a good thing, he says. As not all women out there are right for you, and that you need to get rejected to help you find the women who are a good match for you. That you're better off finding out if a woman is interested in you before you've invested a heap of time and/or money in the pursuit of her.

One point that he emphasizes is that you can't make a woman attracted to you if she isn't already. That if you're just not a woman's type then there really isn't anything you can do about it. You need to accept the fact that not every single woman is going to be interested in you.

Once you accept this and can put your ego aside, then you can be honest with women and you'll get some positive responses along with some negative ones.

But the whole point of his approach is to put you in a position of power and not allow women the chance to play any manipulative games with you. If you tell them what you want, they can either accept your offer or decline it.

They won't be able to string you along and let you think they are interested when perhaps they are just wanting someone to pay attention to them or spend money on them.

He argues that it's actually more manipulative to be excessively complimenting women, spending money on them, acting overly nice around them etc. to try and get them into bed with you. That putting on a fake persona to impress someone isn't the best road to take.

What's more, he says that many women are actually aroused by a man who can confidently state what he wants and make no apologies for it. That women are so unaccustomed to men being honest and forthright with them, that when they meet a guy who can express his intentions in a no nonsense manner, it's a big turn on.

It's hard to disagree with any of this. I think Currie does a great job of showing you the benefits of being totally honest with women as well as making you aware of the reactions you are likely to receive.

Limitations Of This Book

While this book is definitely worth reading, it isn't perfect. It is more a philosophy on approaching and interacting with women rather than a 'how-to' guide. There aren't really any practical examples given on what to say to approach a woman and what to do next.

Now if you already have some experience approaching and flirting with women, you'll be able to fill in a lot of the gaps yourself. Just the broad idea of communicating in a more honest way will be enough for you to make the ideas presented here work for you.

But if you're a guy who is quite new to this and aren't too confident at even approaching women and having regular conversations, then this will be more difficult for you. Because it takes a fairly high level of self-confidence to make Mode One communication work.

It's not just telling a woman that you want her that's the hard part, it's also dealing with how she responds to this. As Currie points out, women will really test you a lot when you talk in such an open and honest way.

The key to handling this is to not apologize or make excuses for yourself. If you back down she will see that you aren't as confident as you were pretending to be. So the more experience you already have with women the better equipped you will be to handle this.

If you can't already handle tests from women and be emotionally non-reactive to anything they do and say, this will be a tough challenge for you. It's probably worth checking out our other reviews for a more practical guide on building attraction with women before working up to the ideas in this book.

The other thing you need to consider is that it simply isn't a smart idea to tell every woman that you're attracted to that you want to have sex with her. There are going to be certain social situations where being upfront with a woman about your desires is going to make her feel uncomfortable and you look foolish.

Currie doesn't explicitly say you should do this in his book, but there is also no context given as to when to say what's on your mind and when it is more appropriate to follow social conventions.

Assuming that you have a reasonable degree of common sense, this shouldn't be too hard to figure out though. As a general rule, you should refrain from being too sexually direct with a woman when there are other people around. Even if she is interested, she will not respond positively as it will damage her reputation.

Being Provocative To Create Sexual Tension

One of the most important lessons of the book, and something that is appropriate no matter your experience level, is that you need to be provocative to create sexual tension with a woman.

Being provocative is used to basically mean being the opposite of nice and polite. That your attitude needs to provoke a reaction so that it creates a strong feeling in her.

Currie's direct and confident attitude is what he uses to create sexual tension. When most other guys are concerned about appearing polite and respectful, they are denying their natural masculine essence which is what women are really attracted to.

This is one of the main areas that guys have trouble with, and if you can learn to master creating sexual tension your success with women will skyrocket.

Mode One is an interesting book that every man should read at least once. It's really more focused on your mindset for interacting with women and the world as a whole. It's aim is for you to base your self-esteem on who you are as a man and then communicate what you want authentically. If you read this book you will understand how to eliminate any chance of manipulation by women. As Currie notes, you only have control over how you behave towards women, and how you allow them to behave towards you.

great review.... currie does state that being mode one in the place you work is not a good idea, but he says anywhere else you can do it... he doesnt go to nightclubs, but i guess it can work there too... but he uses it just in the daytime or when he's in a social gathering.
1 results - showing 1 - 1