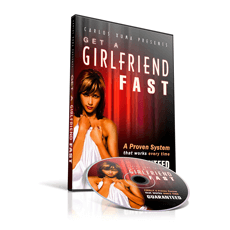 "Good Overview for Beginners, But Without Much Depth or Originality"

Overall rating
5.4
Effectiveness
5.0
Ease of Implementation
5.0
Innovativeness
1.0
Packaging/ Customer Service
9.0
Value for Money
8.0
Reviewed by Jackson Hunter
January 08, 2012
The Good
Affordable price. Introduces a lot of dating advice concepts without being too technical. Audio quality is excellent.
The Bad
Nothing really innovative here. By trying to cover such a broad range of topics, not enough depth is given to many of them.
The Bottom Line
If you have no experience whatsoever with dating advice and are looking to increase your success with women, you may find this product beneficial. This is an entry level product for absolute beginners only. Some of the ideas suggested here need a base level of confidence and competence with women that beginners may not yet possess, though.

Carlos Xuma has been teaching men to meet and attract women for many years now, and Get a Girlfriend Fast is his introductory level audio program. It's really aimed towards guys who have little or no knowledge of dating advice, and want some quick, practical tips they can use to have more success with women.

Even though the title is Get a Girlfriend Fast, Xuma encourages you to spend some time practicing the skills he teaches and not to rush into a relationship. So this is also applicable for men who want to date multiple women, not just those looking for a girlfriend.

Now to get this out of the way early, I would say that at least 90% of the information here I have seen and heard before. At times, it almost sounds verbatim from other sources. This is a fairly common occurrence within the dating advice industry, but one that is worth being aware of here.

The structure of this program is to provide an overview of all the mindsets and skills you will need to work on to succeed with women. Xuma states at the beginning of the product that this is just an introductory course and therefore won't be too detailed, but that he has other products you can purchase for more depth on particular subjects.

Xuma kicks off the program by giving you his number one attraction building secret. Basically, to never give a woman a direct answer. He claims that it sets up a supplication frame, which IMO, is not always the case.

A lot of guys who are new to this will go overboard with this idea and risk coming off as weird. Whereas women may be trying to have a normal conversation with you, if you keep dodging their questions and giving strange answers you can come off as trying to hard and do more harm than good.

A couple of examples he gives are, if a woman in a shop asks you what your postcode is, you can reply, 'What would you like it to be?' Or if you are being served in a fast food joint and she asks 'Would you like fries with that?' you can say 'No, but I'll have a quart of gas.'

These sorts of answers can sound pretty lame, and are not a great example of humor to attract women. It's about on par with the guy who yells out 'Taxi!' when someone knocks over a drink in a bar. Humor is great, but originality is even more important.

He does say that you need to use calibration to make this work, but he doesn't explain what this is or how to use it. For a program aimed at beginners, this needs to be explained better. Teasing women and giving them a hard time can work great, but can quickly become tiresome if overused.

Probably the best parts of this program are when Xuma covers 'inner game' and what to focus on when approaching women. I don't know if any of the aspects here are exactly revolutionary, but he explains them clearly and seems to have a greater background and interest in general self-help work than many other dating coaches.

He gives good advice that for guys new to this will help them see this as a long-term process of working on themselves and mastering their thoughts and emotions.

Also, the advice on what makes men attractive to women will be good for newer guys who haven't heard this before. As will a list of some of the most common mistakes that guys make that cause them to be perceived as the 'nice guy'.

Step by Step Guide to Meeting and Seducing Women

The program is structured in such a way so that Xuma takes you through his method of meeting women all the way through to sleeping with them. Which is good in that it gives guys an idea of the full picture. But it's also ambitious to try and cover the whole spectrum that this entails in a limited amount of time.

There are a lot of ideas and techniques that are touched upon in this program, but not a great deal of depth given to them. Which is intentional for the most part, as Xuma appears to not want to bog guys down with too much theory, but to focus on the practical elements.

However, the information presented is only just scratching the surface in too many places. Guys who are truly new to this may be given just enough information to be dangerous to themselves, as they won't realize what they are really doing or why.

For example, the subject of cold-reading is briefly covered. Xuma lists a bunch of different lines you can say to a woman to appear as if you have some insight into who she really is, to help create a connection. The problem is, he just reads them out of a book and makes them sound incredibly robotic.

No mention is given to the fact that you need to adapt these lines to make them sound conversational and appear off the top of your head. If guys recite these lines as is, it's going to creep many women out and the guy won't understand why.

There's no ideas given as to how to respond if she asks follow up questions on these, or if she disagrees with what you have said. Guys who are given just the lines, without the knowledge behind it, may be left floundering.

The same goes for the topic of NLP, which is briefly touched on for about a minute. The idea of using sensory-rich words to induce certain reactions in women is mentioned, then explained as an example of NLP. But it's such a huge topic that unless it is covered in the necessary detail, it would be better left out altogether.

One of the biggest problems that may arise is guys listening to this whole course and throwing out random smart-ass lines, cold reads and flowery language with no idea what they are trying to accomplish with it. New guys often just hope if they throw out enough lines at a woman, then something will stick.

But if he isn't being consistent in his attitude and personality, women will often sense that something doesn't feel right. Which could be a problem here, as this tries to cover so much ground that it feels inconsistent in places. Sometimes you get told you need to be the bad boy, other times the advice seems to conflict with this.

For example, a conversational opener is given for when you are in a coffee shop, that involves using NLP type language. It really feels out of place and should be avoided at all costs, IMO. It clearly doesn't fit in with the idea of the bad boy that Xuma talks about, so one really has to wonder why it is suggested here.

The majority of the concepts that Xuma talks about here are actually pretty correct, and ideas that guys would do well to listen to.

The problem is a lot of the specific examples of these concepts are not great, and I personally wouldn't use quite a number of them. Everybody has their own style and take on things, and perhaps some of these lines may work well for some guys, but there are better examples that could have been given in nearly every case.

To be fair, it is next to impossible to cover everything in enough detail in a program such as this. Xuma makes an admirable effort at providing you with a broad outline of what steps you need to take to achieve success with women, while filling in some of the blanks.

Hopefully this program will be enough to motivate you to get moving in the right direction and realize that you can make a change and improve your dating life. As for the specific skills and techniques you can learn that teach you HOW to attract and connect with women, there are other products that would be worth looking into.

There is a bonus attached, of Xuma interviewing Dr Amir Sabongui, affectionately known as Doc. The focus of the interview is about the advantages of increasing your social circle and building up an attractive lifestyle, rather than just going to nightclubs and bars to pickup women.

The ideas presented here are solid, and it's well worth listening to. The downside here once again though, is it's pretty light on the practical side of how to do this. Just telling inexperienced guys to go out and be more sociable and make lots of friends doesn't really fix the problem. I'm sure they know they need to do this, but would be looking for more concrete examples of how to do so.

Doc lists some tips that he used though, such as throwing out his television, trying to learn about many different subjects to become more interesting, throwing parties etc. As far as bonuses go, this is a pretty decent one.

This is an introductory program that would really only be of value to beginners. Some good ideas and concepts, but lacking when it comes to effective, practical examples in some places. Some of the ideas here are not covered in enough depth and may confuse some guys. A lot of the actual lines and examples of dialogue I personally would avoid using. Decent as an overview of achieving success with women, but other resources would be needed for more specific details.
Help other users find the most helpful reviews
Was this review helpful to you?