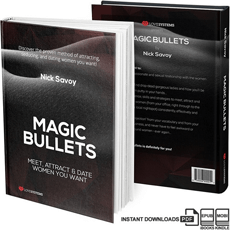 "I think it's great. By far better than anything else out there."

Overall rating
8.8
Effectiveness
9.0
Ease of Implementation
9.0
Innovativeness
8.0
Packaging/ Customer Service
8.0
Value for Money
9.0
Reviewed by Orpheus7
April 26, 2007
What I can say is that the book is beautifully written because it deals with the reader on a few different levels. There's a lot of stuff for newbies, so if you aren't already good, the book is perfect. But even within the newbie-ish stuff, there is a lot of stuff for advanced guys (like me ). Often major pearls of wisdom are inside sections that appear at first to be more general. Like when the book is talking about social circle stuff, I was thinking, yeah, I know this, until all of sudden - how DO you shake guys off who you're friends with when you want to be alone with a girl. Just a couple of sentances, but an example of a priceless nugget.

I think the origanization might be better - more bullet points so some of the great insights don't get missed. But the writing is good - and funny! - so I don't mind too much.

As an advanced guy, I think it's great. By far better than anything else out there.
Help other users find the most helpful reviews
Was this review helpful to you?