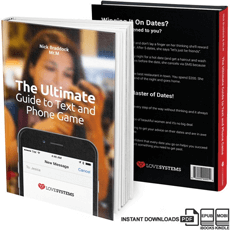 "Makes the Difference between the Good and the Great."

Overall rating
9.1
Effectiveness
10.0
Ease of Implementation
8.0
Innovativeness
10.0
Packaging/ Customer Service
9.0
Value for Money
9.0
Reviewed by Sinque
January 28, 2010
Without any useless writing, let me start with my impressions right away:

- The first chapter of the book deals with actually 'turning her phone number into a date'. THIS IS SO KEY! Imagine changing few tiny, little things of your game and getting twice as much dates out of your phone numbers. That's basically what this chapter deals with. Pure gold.

- Another chapter for example is about how to properly open her via text by acting light/short/fun and what not to do, such as asking logical questions, telling her how great it was to meet her, acting overly emotional etc. No better way to show you via an example:

Bad: Braddock: “Nice to meet you Sarah. Do you have plans tomorrow?”

Of course this is only a cursory example, Braddock and Mr.M go into GREAT DEPTH. Not only here, but in the WHOLE BOOK. This means, it's for everyone. The newbie and the experienced guy.

- Introduction of the concept of 'fuses'. There's a difference between a girl, that is super on (short fuse) and a girl, that isn't that excited talking to you (long fuse).


I've seen lots of dating science products and seminars and trust me, this book is a MUST HAVE. Not only does it give you tons of examples of things to write, but it also describes the 'matrix' behind all that stuff, so you know how to do it naturally after some practice. It's one of those products that makes the difference between the good and the great.
Help other users find the most helpful reviews
Was this review helpful to you?